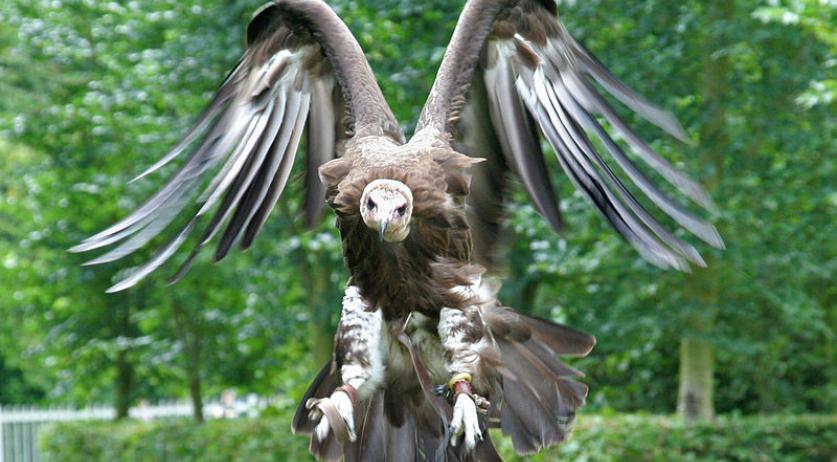 A visitor to the Rotterdam zoo was attacked by a vulture this week. The bird flew at Henk Koelwijn's neck and left a big scratch on his ear and back of his head, AD reports.  The accident happened on King's Day in the aviary where visitors can walk among mostly scavenging birds. According to the AD, Koelwijn made eye contact with the vulture. "I thought that the vulture had a grim look in his eyes. I still told my friends: if such a beast wants to harm... And before I knew it the vulture flew into my back." he said to the newspaper. Koelewijn, a 27 year old biology teacher from Utrecht, described it as a "Bokito action", referring to the escaped gorilla that caused havoc in the same zoo in 2007. One visitor was seriously injured then. Koelewijn also realizes that it could have been much worse. "I am a man of 27. I don't even want to think if this vulture had put his claws into a small child." Koelewijn was treated by the zoo's first aid station and had a tetanus shot on Tuesday. He called the zoo's reaction to the incident "casual". "They said that vultures never normally do this. And that was it. But who says it will remain at this one time?" The zoo initially told the AD that they consider this a "once-off incident". "Vultures don't look for the public. Perhaps it made an estimation mistake when flying and hit the visitor accidentally." The zoo stated that they will be extra observant on the vultures for the coming time to be sure. After seeing the AD's headline, Ben Westerveld, the head of the Africa department at the zoo spoke to De Morgen and explained some measures the zoo will take. Westerveld explained that the vulture probably felt threatened because of its baby, which was born at the beginning of this month. "The little Hooded Vulture is no bird of prey. They only eat carrion, they never attack, until now." The zoo will attempt to prevent another Bokito incident in the aviary. "From now on the aviary is only half open, the public will stand at a distance from most of the birds including the nesting vulture. We must think of both parties, our public, but also our birds", Westerveld said.