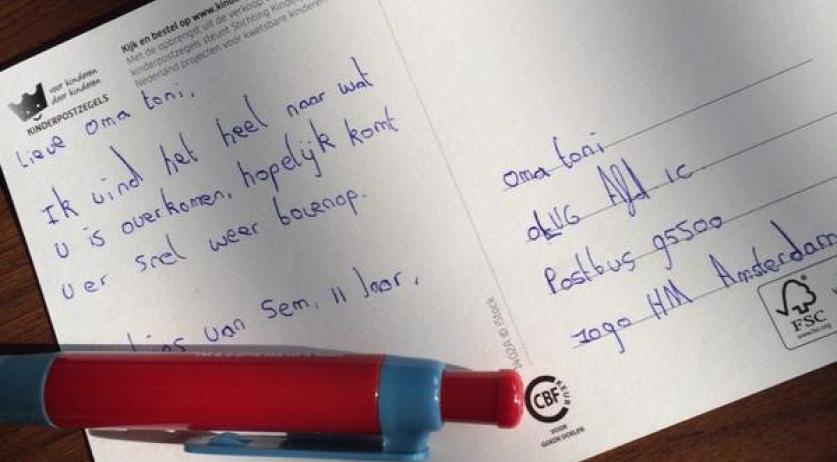 Oma Toni (96), who was stabbed by a disturbed man in De Pijp last week, is doing a bit better. Since her stabbing, she has received more than 3 thousand cards and well wishes. Oma Toni's grandson, Roland Heeremans (42), and his wife Nienke Schipper (39) told Het Parool about their oma. "Last weekend it was still touch and go, and we thought it was over. She needed surgery on her intestines, which were perforated at seven places. She is such a frail, old little person, the question is whether she can recover from this. But she is a fighter. She will not die of such an incident, which she described in hospital as an attempt on her life." said Heeremans. "But it now seems to go better. Her blood pressure is rising and the infection is less. The first day we went to the hospital to give oma a kiss because it might be the last time. Now we give oma a kiss to show that we are there for her." Heeremans and Schipper know how important it is for Oma Toni to have her family around here. "Her whole life is devoted to her family. She grew up in a family with many children, how many we actually don't know exactly. They all lived together in a small house in Wetbuurt, the current Amsteldorp." Heermans told the newspaper. "Oma Toni was the eldest sister and is still seen as that, even though many of her brothers and sisters are now deceased." Family remains the most important thing for Oma Toni. Her door is always open for children, grandchildren and great grandchildren on Sundays. "If I go there, I always run into a niece or nephew. Oma sits in her chair, happy to look around. Enjoyment is a small word, she'd say, I'm so rich, look how much family I have around me." According to Heeremans, there was a lot of love between Toni and her husband Bert. The two of them moved into a house in Govert Flinckstraat when they got maried, and Oma Toni still lives there 78 years later.  "Until the last day of my grandfathers life, they were madly in love" Heeremans said to the newspaper. "You saw that in everything: they cuddled a lot and really huddled together. Then he said, 'I love you darling, you know that.'" "We continue to hope that she can go back to her own home." Heeremans told the newspaper. "Bridge in the nursing home is not for her. There is only one neighborhood for her and that's De Pijp, and her house is sacred. We so hope that she can get that back. Please let it be so." Those who want to send cards and well-wishes to Oma Toni, can send them to: OLVG afd. IC Postbus 95500 1090 HM   Amsterdam