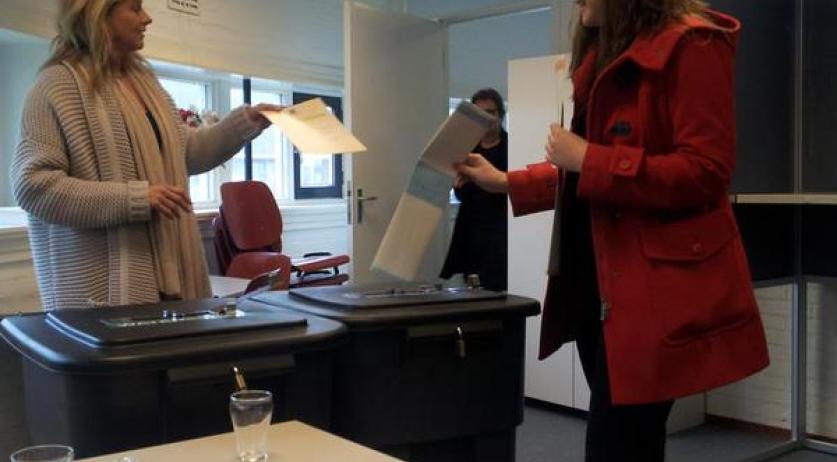 As election day rolled on into Wednesday night, political leaders in the Netherlands came out of the woodwork to address their parties and give their reactions to exit polling. The polls showed drops in support for the coalition parties VVD and PvdA, as well as a surprise slide for anti-Islam PVV, with significant gains for D66, and more modest gains for the SP and the conservative Christian alliance CU/SGP. Voters went to the polls Wednesday for the provincial elections, which lead to the makeup of the Eerste Kamer, the upper house of Dutch parliament. An estimated 49 percent of eligible voters cast a ballot in the election. “It is remarkable “that the economy in the Netherlands is again running better, that people see that exports are attractive, and purchasing power is growing. The Netherlands sees it, and that is reflected again in this result,” Prime Minister Mark Rutte said. “It is also nice to see that many Dutch people want this cabinet to continue. Ninety percent of VVD supporters say, ‘This cabinet must keep going, and we are going to do that," the VVD leader added. The D66 “has won its own positive story. Ten seats in the Senate is a fantastic result,” said party leader Alexander Pechtold. “For D66, this is the best outcome in 25 years. We focused on tax cuts, to reduce the unemployment rate. The voter must be heard and recognised." "This was not an easy campaign. The Labour Party has shown its best side in recent months. I am incredibly proud of that,” said PvdA leader Diderik Samsom. “But despite all these efforts, despite our optimization, despite the budding recovery of the economy, we did not have enough success maintaining the electorate’s confidence. We need them to recover, but tomorrow we must keep standing. It goes well with the Netherlands, but for many people it's not good enough,” he said. “We have lost, but we are not defeated.” “What a wonderful night. A historic night,” said SP leader Emile Roemer. “The third election win in a row for the SP,” he added, pointing out a projected increase from eight to ten Eerste Kamer seats. “We are definitely the largest on the left.” “If the SP wants to achieve something for its voters, the party must use its influence in crafting the budget and, for example, a new tax plan,” said Deputy Prime Minister and Social Affairs Minister Lodewijk Asscher (PvdA). He added he is open to a collaboration with the SP, who appear to have bested the Labour party for the first time. “The result is as expected,” said Labour chairman Hans Spekman. “We are not happy with it. This is extremely painful for many party members, but it is as expected.” “It’s disappointing that we suffered a light loss, and that the turnout fell short, which always really hurts the PVV,” Wilders said. “I hope that an additional seat returns in the course of the night.” “This is a night we will not soon forget. It’s an exciting evening, and it will be a long evening,” said CDA leader Sybrand Buma. “But one thing is clear: The Netherlands has given great support to the CDA. Support for our decisions, lower taxes, more jobs, more security,” he added. “Someone asked me, ‘Is the CDA back?’ My answer was, ‘We’ve only just begun!’” “We are very grateful for these great preliminary results, as SGP scraped [together] increasing support in recent years,” said SGP leader Kees van der Staaij. “Nice that not only we, but also the ChristenUnie and CDA showed an increase,” he added, referring to the other two Christian parties.