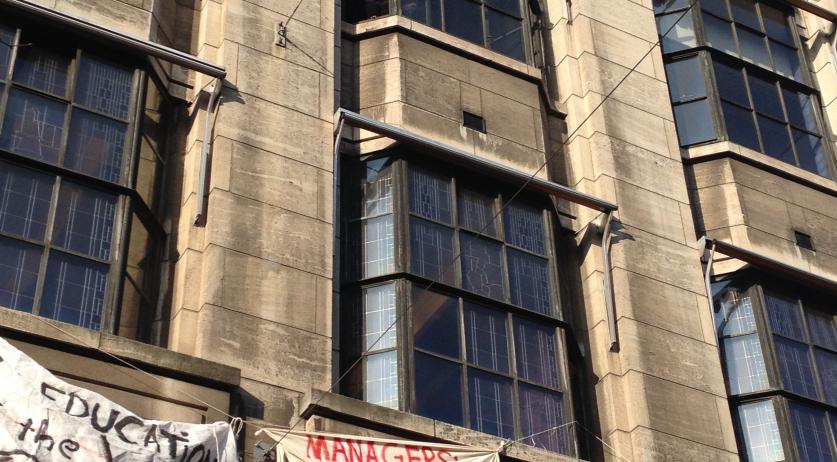 The fifth day of the Bungehuis occupation has left the protesting students without heating but De Nieuwe Universiteit (The New University) and the University of Amsterdam (UvA) do not seem to be closer to reaching an agreement. The protesters in the Bungehuis took to Twitter on Tuesday evening, informing followers that their heating was cut off, but they are unperturbed by the cold treatment. "We're keeping warm inside through all the statements of solidarity we received," the group posted. They also uploaded a video to Youtube on Monday which shows representatives of De Nieuwe Unviersiteit hoisting the organisation's flag high above the roof of the Bungehuis. The Bungehuis building houses the university’s humanities faculty, the victim of cutbacks and a drastic reorganization opposed by many students and faculty members. University administration has been locked out of the building since Friday when protesters locked themselves in. The group maintains that they will not leave the building until their demands for university democratization are met. A spokesperson for the occupying group explained to NL Times that the protesters have not had direct contact with the university, saying that they "refuse to communicate". But Dean Frank van Vree of UvA insists that this is incorrect. "There has been regular contact, since Friday morning, directly, through mediators, by phone and by mail", he revealed to NL Times. Still, the university lodged a legal complaint alleging trespassing and unlawful entry, something the occupiers say they learned via media sources. Van Vree did say that the university let the protesters “know that they were hold legally responsible for possible damage.” According to a Facebook post by a researcher who works in the Bungehuis, the university also cut off internet and UvA network access. "I work in the Bungehuis too and was able to go inside today and work in my office. The students were super helpful. Yet, I could not continue my work because the CVB [the University's board of directors] blocked not only the access to the internet, but also to the UvA Network, which meant I could not access my account on my UvA computer,” the researcher said in a statement re-posted by the occupiers in a release. “If you come to Bungehuis to work, the students will not block you. Circumstances might be a bit different than normal and perhaps not easy if you work with volunteers. But the students there seem to be the least of my worries…" the researcher said. Van Vree counters, saying that those employed by the university, including internal Ph.D. candidates, were told not to enter the building because it is an unsafe environment with exits and fire escapes blocked, and the faculty is liable for the well-being of those inside the Bungehuis.

UvA cut off our central heating, but we're keeping warm inside through all the received statements of solidarity.Thank you! Keep 'em coming!

The student occupiers are treating the #Bungehuis with care and respect. They even improved the bathrooms! pic.twitter.com/F1mKYKieL5