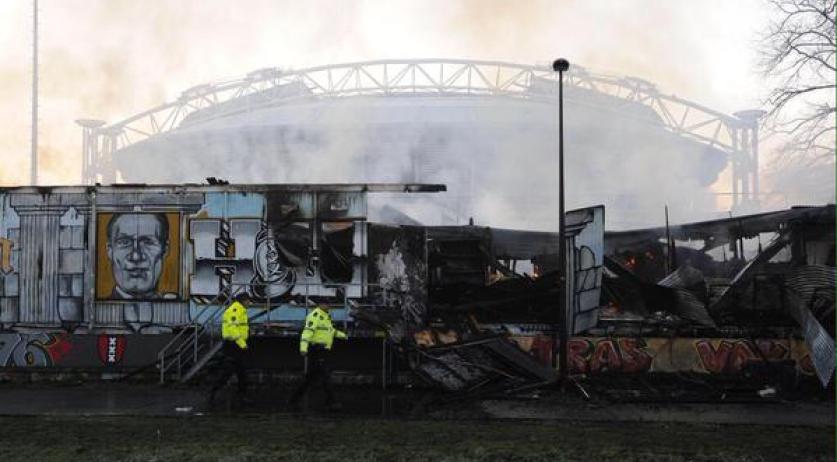 The clubhouse that hosts supporters of Amsterdam's Ajax football club is completely lost, the group says. Many valuable items, such as signed football jerseys, were lost in a fire that raged through the clubhouse early Friday morning.  The fire was a huge blow for the club and the supporters, says the financial director of Ajax, Jeroen Slop. "There were many items that had sentimental value to our supporters," Slop says. "They are irreplaceable." Dutch national footballer and former Ajax player Klaas-Jan Huntelaar took action and offered two of his jerseys on Twitter for the new clubhouse. He also called on former Ajax players Luis Suarez, Wesley Sneijder, Rafael van der Vaart and Zlatan Ibrahimović to make a similar donation. Many hardcore Ajax fans have been suspecting Feyenoord supporters of arson on social media. An Ajax clubhouse was also burnt down in an arson in 2005 allegedly by ADO Den Haag supporters. The incident led to tit-for-tat violence between hooligan club supporters. The cause of the fire is still unknown. Ajax is playing against fierce rival Feyenoord Rotterdam on Sunday. A heavy police presence is noticeable in Amsterdam's city center, particularly in the Red Light District, and around the stadium before, during and after matches with intense rivalries at stake. No further safety measures have been announced in advance of the classic match. Additional reporting by Zack Newmark.

Busy Sunday? How about some Ajax-Feyenoord? To get in the mood Feyenoord ultras last night burned down Ajax ultras clubhouse. As you do.