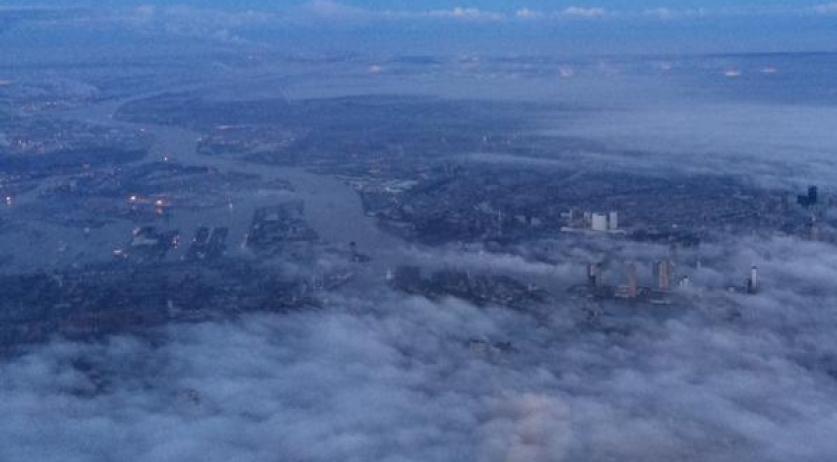 Unexpected fog has caused delays at Schiphol Airport in Amsterdam throughout Monday. The airport issued an advisory telling passengers to pay attention to their website and app, or to contact their airlines for the latest information. The unusually thick fog blanketing the airport near Amsterdam has rendered some runway space unusable, leaving aircraft permitted to cross some areas only with the accompaniment of a car. Fortunately the ground is not affected by ice, a spokesperson said. Today's fog continues in the pattern of bad weather from last week, which prompted "code yellow" warnings across the country. Rotterdam-The Hague airport was also affected by fog into Monday afternoon. "Due to the current weather conditions, a number of flights this morning by the dense fog at Rotterdam The Hague Airport diverted to other airports," the airport revealed in a statement. All flights to the airport on Lufthansa, and all flights to the airport from London were diverted to Schiphol once fog lifted in Amsterdam. A Turkish Airlines flight from Istanbul was rerouted to Cologne, Germany where passengers were ushered onto Rotterdam-bound busses. Flights were allowed to land in Rotterdam starting at 1:45 p.m. Several departing flights were cancelled. https://twitter.com/RTLNieuwsnl/status/557131237249536000/ https://twitter.com/NLNieuwsAlert/status/557131725130989568

Rotterdam half in the mist. No landing on #RotterdamAirport so #Schiphol instead! pic.twitter.com/lPzRpVUj1o