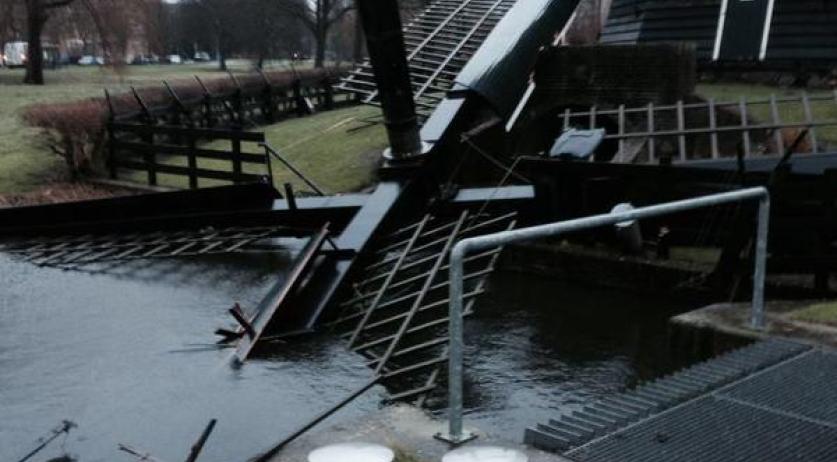 A windmill in Alkmaar, Noord-Holland has been left without vanes following strong winds this morning. The 450-year-old Geestmolen (Spirit Mill) is badly damaged, devastating its miller, Piet Kuiper. Kuiper is the windmill's miller for fifty-four years, succeeding his father who once operated the pumping station. Overcome by emotion at the destruction, Kuiper says he is "still totally shaking". While a part of the mill's chain mechanism was dislodged and broken, Kuiper speculates that the strong gusts of wind blowing from behind the blades ripped them from the mill. He is grateful that there was not further damage, and says he hopes it will be restored to its original state. "It would be a shame if such a storm ruined all our work,'' Miller said while crying during an interview with Dichtbij. A lengthy Code Yellow weather warning has covered Noord-Holland for the past week. Official meteorologists at the KNMI issued the first warning a week ago due to wind gusts hitting 100 km/h, and it has been extended each day since. While the mill is no longer operational due to a residential building on its first floor, the municipality of Alkmaar and the Holland North District Water Board maintained the mill. They are now investigating a remedy for the damage. People living in the area and other millers throughout the Netherlands have taken to various forms of social media to express support and sympathy for Kuiper.