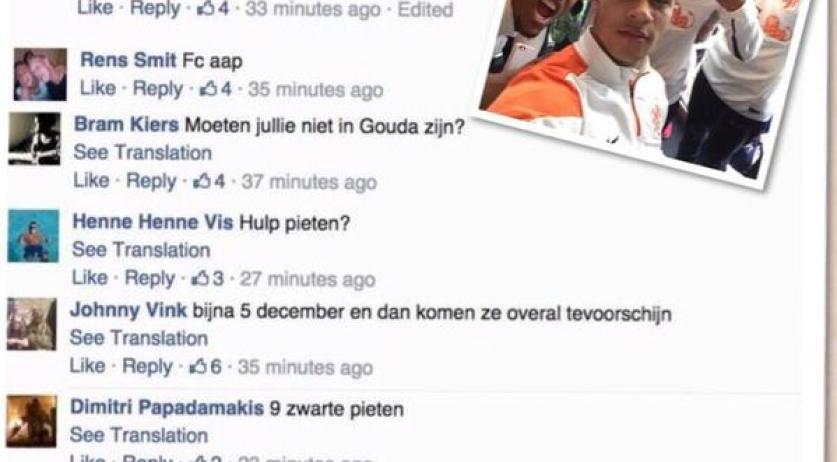 On Sunday night Robin van Persie, captain of Oranje, called on the Public Prosecutor to investigate the racist comments on the selfie Leroy Fer posted on Twitter and Instagram. The photo depicted Fer along with other dark skinned players of the Dutch national team. Midfielder Leroy Fer posted the picture on Twitter, after which several sites shared it on Facebook and Twitter. A number of people left racist comments on the picture, including comparing the players with Zwarte Piet. "It is shocking that such a thing still happens in 2014", said van Persie. "This should be dealt with harshly. It's time to set an example." Van Persie has discussed the matter with the relevant players, and according to him, it saddens them too. "We can not let this pass. Color should not matter. We represent our country all together, but apart from that it is very sad that this is happening." Wesley Sneijder is also angered by these events. "These kinds of idiots do not belong in our society", he said in De Telegraaf on Monday. "Sad that this still happens in 2014. If you dare to give such racist comments, there is something wrong." The involved players will possibly lay charges. On Sunday PvdA Parliament Members Ahmed Marcouch and Keklik Yucel asked ministers Ivo Opstelten (Security and Justice) and Ronald Plasterk (Internal Affairs) if the Public Prosecutor can do an investigation (and possible prosecution) into the statements, even if no charges are made. Van Persie would welcome this. "It's not hard to figure out who they are in any case, their response shows their name and their profile." Coach Guus Hiddink also expressed his disgust. "I can not read all the comments, the head should be taken off of any form of racism." "I am shocked by the comments. That this is still happening in 2014 is disgraceful." says Memphis Depay in Metro. Depay is one of the players in the picture. "In my youth I experienced a lot of racism. It must once be stopped. The group should come up with a statement"