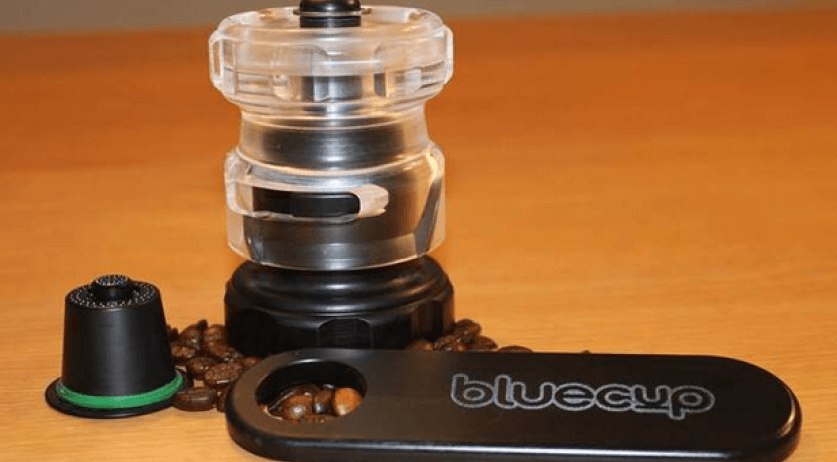 Amsterdam foursome Mike, Lars, Daan and Hans are taking Kickstarter by storm with their reusable coffee capsule dispenser “Bluecup”. The product gives users the ability to use the Nespresso system with their own coffee capsule, and has reached a pledge total of €21k, representing almost half of the company's target amount with seven days left to go. In a telephone interview with the NL, company founder Mike Slagboom said that presuming the Kickstarter target of €50,000 is reached, they hope to release the product to consumers by February 2015. He said that all funds raised on the website will go towards manufacturing moulds for the Bluecup capsules, which he hopes will be sold wherever Nespresso compatible capsules are sold. Founders Mike, Lars, Daan and Hans say that the idea was founded upon their disappointment in being obliged to buy expensive espresso capsules. “I was also a little cocky and inspired to create something giving me a better feeling,” Mike says on their Kickstarter profile. “I wanted to create something sustainable and for a fair price”. Cleverly displayed in a short explanation video, the Bluecup machine gives buyers the option of filling a coffee capsule with their own brand of coffee instead of having to purchase pre-filled capsules manufactured by Nespresso or other brand competitors. The Bluecup capsules are compatible with common Nespresso machines, and can be used at least 100 times. Bluecup also claims that using the product will save users time and money, not to mention producing less waste. “Based on reasonable and fair market prices for espresso grind, the price per Bluecup serving is 50% less than Nespresso serving  and 20% less than other servings of disposable capsules,” Slagboom said. Pledges start at EUR 5, with those pledging €29 or more being rewarded with a Bluecup creator, two Bluecup capsules & 200 replaceable Bluecup foils. A similar project was started by Eindhoven-based company Coffee Duck in 2012, but has received mixed reviews on Amazon.com. This is the first Kickstarter project from the four inventors.