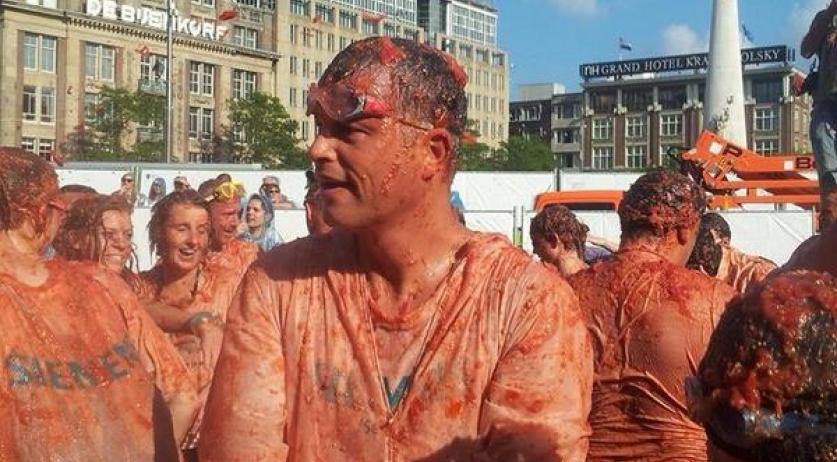 Tomato fight in Amsterdam's Dam Sq a protest of Russia

Inspired by the annual La Tomatina in Bunol, more than 1,000 people took to Dam Square on Sunday armed with tomatoes to protest against Russian sanctions. At 3 p.m a shipping container was emptied into the square and participants pelted each other with 120,000 pieces of the overripe fruit bought from farmers left in the cold by Russia’s boycott of European fruit and vegetables. The initiative of four young Amsterdam entrepreneurs was given approval by the City of Amsterdam, provided that the organisation took care of the cleanup. Plastic coated fences were erected to insure against damage to the surrounding buildings. Participants paid 15 euros each, and were told to come to the battleground with eye protection. The Netherlands is one of the world’s largest tomato exporters, second only to Mexico. Farmers sent over $100 million worth of tomatoes to Russia last year alone. In the wake of Russian sanctions, Dutch farmers have been offered a subsidy to dispose of excess crops or donate them to food banks. Participants described the fight as a wonderfully enjoyable experience, if not challenging at times. "It was hard in there. It was mean. But it was fun," participant Lois Bloedjes told the AP. "Everything became one big pile of mush. There were people swimming in it on the ground." The remaining pulp will be brought to a biogas production facility, and converted into green energy.