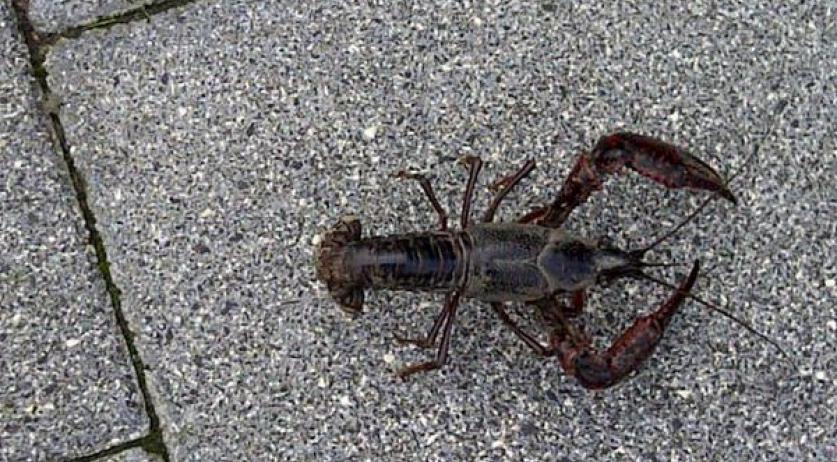 Freshwater lobsters, or crawfish, are scuttling around Amsterdam streets, bumping into confused Amsterdam residents. After the heavy rainfall on Monday, many of the crustaceans have left their hidey places in the canals to hunt for new territory, Het Parool reports.  Ecologist Bart Specken of the water company Waternet explains that this is regular crawfish behavior. "Every year around the Summer, when young crawfish develop into adults, they get the urge to discover new territory. They do that at the moment when it has rained a lot", Speclen says. "Otherwise they dry out." The crawfish seem to believe that there are greener pastures beyond the Amsterdam canals. Ecologically speaking, the crustaceans don't belong in this particular environment, but Specken believes that an unsatisfied hobbyist may have released them from an aquarium around 20 years ago, having bought the crawfish abroad. The ecologist suspects that there might be around 100,000 crawfish living in Amsterdam by now. "But it's difficult to measure, it could also be a million." Some years ago, Waternet was worried about a possible crawfish plague. Specken explains that the introduction of a new animal species to an ecological system could confuse endemic or naturally occurring species. It could be that the animal serves no purpose at all, but it could also destroy the ecology of an environment, competing with other species for a food source. "By now, herons, for example, have already discovered that crawfish are easy prey", Specken says. Specken does not want to say whether the same can be said for humans. "We are not a culinary authority, so we don't make many expressions about food. But it is generally known that crawfish are eaten a lot." In Sweden and Finland, it is a tradition to invite friends for a crawfish feast, serving the crustaceans with dill sauce and potatoes. These are fresh water crawfish, however. It is not sure whether Amsterdam's canal water will produce equally tasty crawfish.