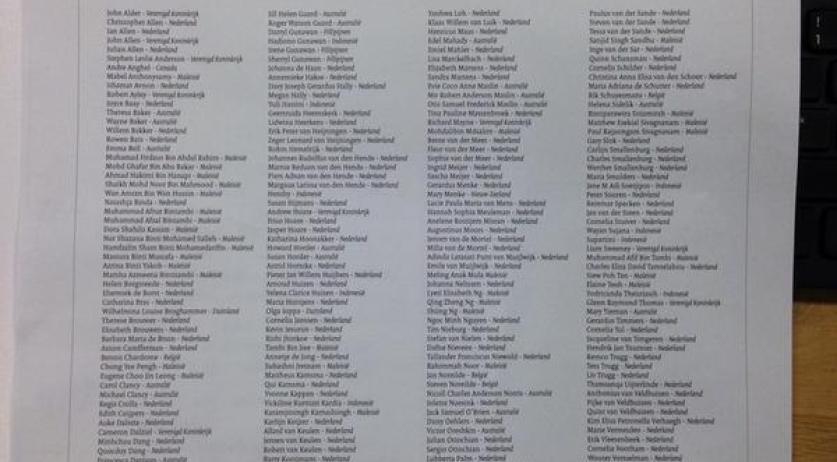 The Cabinet has placed a mourning ad in Dutch newspapers this morning, honoring those lost in the tragic MH17 plane crash in Ukraine, and remembering them "with great sadness and the deepest respect." All 298 names of the individuals who perished in the crash are listed.  Prime Minister Mark Rutte signed the ad on behalf of the Council of Ministers of The Netherlands, which is made up of Dutch Ministers as well as the plenipotentiary Ministers of Aruba, Curaçao and Sint Maarten. Not only the 193 Dutch nationals but also the 43 Malaysians, 27 Australians, 12 Indonesians, 10 Brits, 4 Germans, 4 Belgians, 3 Philippinos, Canadians and New Zealanders who were on the flight are remembered. "Shocked and saddened", the ad starts with bold lettering. "Our thoughts are with the relatives", Rutte writes. "They can depend on support from us all to cope with the great suffering that has been brought unto them so suddenly and unexpectedly." Rutte was in attendance at the closed gathering for families at the NBC Congress Center in Nieuwegein. He was joined by King Willem-Alexander, Queen Máxima and other members of the Cabinet.