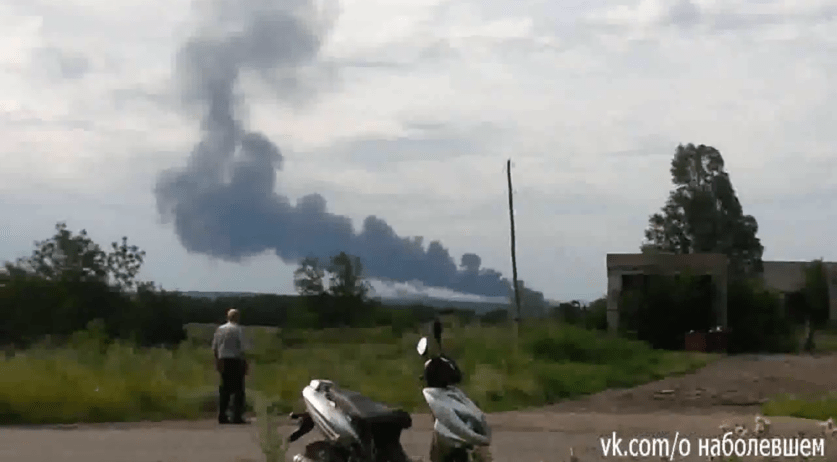 A Malaysia Airlines Boeing 777 that left Schiphol airport Thursday is believed to have been shot down in the Ukraine. The flight had 280 passengers on board and 15 crew members, all of whom are feared dead. Malaysia Airlines would not confirm that the plane crashed, only that the they lost contact with the aircraft, flight MH17. "Malaysia Airlines confirms it received notification from Ukrainian [air traffic control] that it had lost contact with flight MH17 at 1415 (GMT) at 30km from Tamak waypoint, approximately 50km from the Russia-Ukraine border," a statement from the airline said. Ukranian interior ministry advisor Anton Gerashenko said the plane was traveling at 33,000 feet when it was allegedly hit with a missile fired by a Buk launcher, the AP reports. The newswire says their own reporters saw a a similar launcher on the ground in Snizhne, Ukraine, at the far eastern border of the Donetsk region, some 30 kilometers from the Russian border. The Ukranian government denied any involvement in the plane crash. Pro-Russian separatists also said they were not responsible. A video uploaded to YouTube earlier today purportedly shows the crash site. The uploader says the smoke seen in the video is likely located near Snizhne. The veracity of the video has not been determined. Photos published by two Russian broadcasters showed dead bodies strewn across a scorched debris field. Snizhne is 85 kilometers south of Luhansk, Ukraine, where a Ukranian cargo jet was shot down by missile earlier this week. The flight was destined for Kuala Lumpur, Malaysia. Flight MH17 was the airline's only scheduled departure from Amsterdam's Schiphol Airport on Thursday. It left Amsterdam at 12:15 p.m. local time after a brief delay, according to the airline. Witnesses on the ground reported seeing the flight drop in altitude, while plumes of smoke could be seen rising from the ground soon after. This is the second major incident for Malaysia Airlines in under five months. Malaysia Airlines flight 370 has been missing since March 8, 2014, after taking off from Kuala Lumpur. The plane lost contact with air traffic control less than an hour into its flight to Beijing. Along with 227 passengers, 12 crew members were onboard the Boeing 777, which has not been found. People concerned about loved ones onboard Flight 17 may contact Malaysia Airlines emergency number, +60 378 841 234. http://www.youtube.com/watch?v=JhUkqs9CQ0w