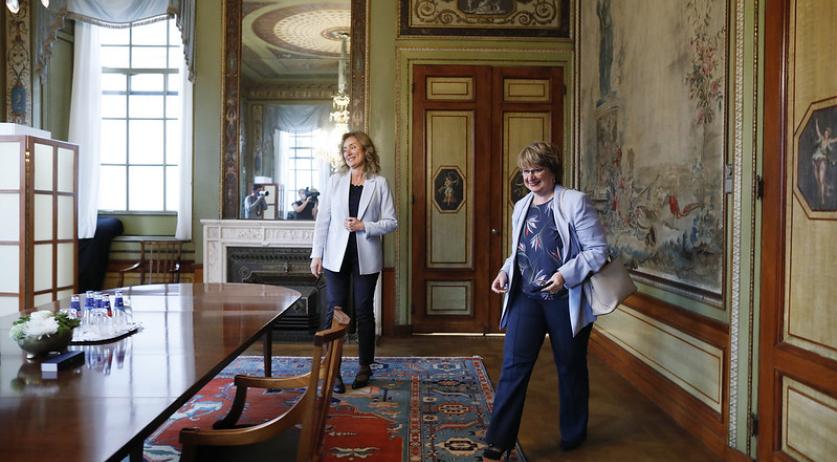 Cabinet formation informateur Mariette Hamer will ask VVD leader Mark Rutte and D66 leader Sigrid Kaag to start drafting a coalition agreement on Tuesday, insiders told Dutch media. Hamer confirmed only that she will deliver her final report on formation talks at 1:30 p.m. on Tuesday to the Tweede Kamer, with a statement and press conference to follow at 3:30 p.m.

Over the weekend, the leaders of the VVD, D66, CDA, PvdA, GroenLinks and ChristenUnie frequently spoke to each other, at Hamer's request. But they just could not come to a majority coalition that everyone was happy with.

Hamer was rumored to be pursuing two other options in the event the talks petered out. The first is the "obvious" choice and possibly the "only remaining option", a source told newswire ANP. That option is to ask Rutte and Kaag, the leaders of the largest parties after the March election, to start working on a draft coalition agreement. Other parties can later sign on to the agreement and propose changes in creating a new Cabinet.

The alternative was to ask Rutte to write the draft by himself, like Queen Beatrix asked PvdA leader Wim Kok to do in 1994. This was believed to be less likely as talks this year have not entered a more advanced stage.

On the D66 website, Kaag confirmed that Hamer asked "whether the D66 is prepared to start with the only two parties that are numerically necessary for every majority coalition: VVD and D66". Kaag called it "an attempt to break the deadlock" and "a stopover on the way to a majority coalition".

The intention is not for the D66 and VVD to come up with a fully written coalition agreement that other parties can eventually join. Other parties will be asked again whether they want to join the negotiations in due time, the sources said. Hamer is attempting to get the parties closer together "through the content".

The Tweede Kamer could potentially debate Hamer's report on Wednesday, though most of the day is reserved to debate the current coronavirus policy in the Netherlands.