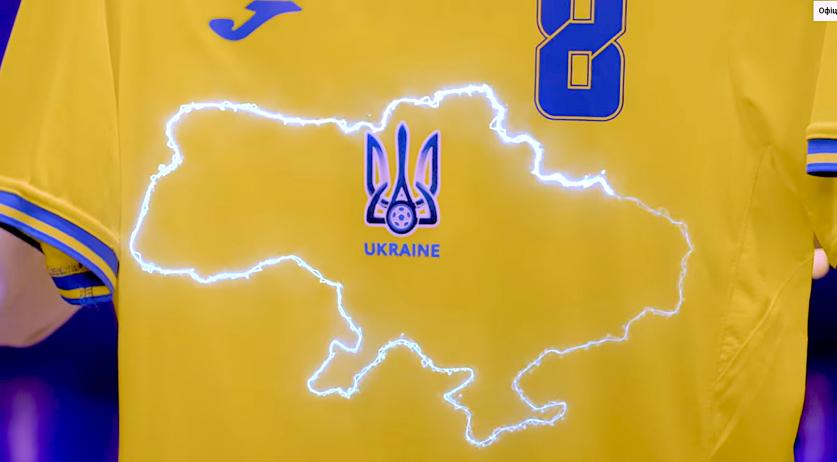 Still image from the unveiling of Ukraine's Euro '20 shirt. It shows a map of Ukraine including the Crimean Peninsula occupied by Russia, and regions in the east occupied by Russian-backed separatist forces - Source: Ukrainian Association of Football at YouTube
Politics
Sports
conflict in east Ukraine
Ukraine
Russia
Oranje
Crimea
UEFA
UEFA EURO 2020
football
Share this:

UEFA stated that Ukraine must remove the slogan "Glory to the heroes" from its Euro ‘20 jersey due to its contextual link to the country's military. Ukraine's football association has appealed the decision, AFP reported. King Willem-Alexander and Queen Máxima also announced they will attend Sunday's match between the Netherlands and Ukraine in Amsterdam when the controversial jersey will be debuted.

Ukraine’s new kit sparked anger from Russia because it featured an outline map including Crimea and the eastern portion of the country. The Crimean Peninsula was annexed by Russia in 2014 but is still recognized internationally as part of Ukraine. Russian-backed separatists have also been fighting to obtain independence in parts of the east of Ukraine.

Additionally, the jersey's display two slogans reading "Glory to Ukraine" and "Glory to Heroes" shown on the back. "Glory to our Heroes", was a slogan used by protesters who ousted a Kremlin-backed president during the Maidan demonstrations in 2013-2014, and was therefore not acceptable, UEFA found.

The shirts prompted a strong response from Russia, who viewed the jersey as a political provocation.

The map was not a concern for UEFA because it reflected UN-recognized borders, and neither was the statement "Glory to Ukraine." UEFA, however, ordered the second slogan to be removed. "The specific combination of the two slogans is deemed to be clearly political in nature, having historic and militaristic significance", UEFA stated.

"Ukraine's football association is in talks with UEFA to keep in place the slogan on its jerseys," the association's spokesperson told AFP. The association argued that "UEFA had earlier approved the new kit and every element of it, including the slogan."

The Netherlands will face Ukraine in their Euro ‘20 opening game at the Johan Cruijff ArenA in Amsterdam on Sunday night.