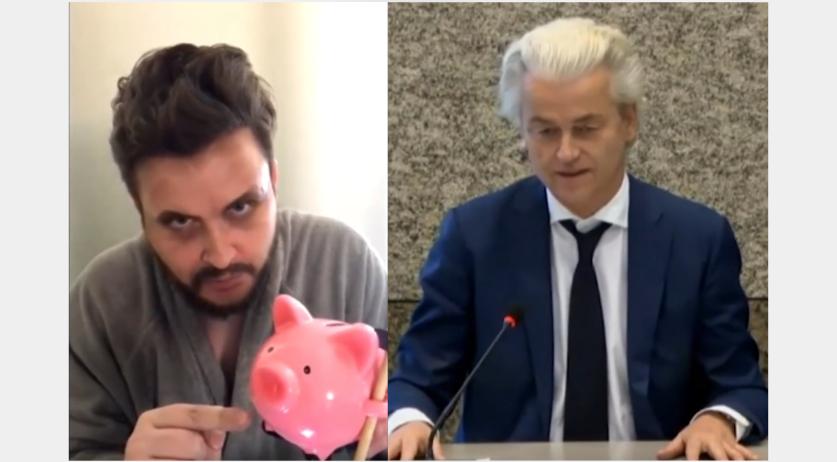 The two Russian pranksters who fooled Dutch parliamentarians posing as the chief of staff of Russian opposition leader Alexei Navalny during a Zoom meeting have now released a video of the prank. Their meeting with the Committee of Foreign Affairs of the Tweede Kamer was initially believed to have been a call with a deepfake version of Leonid Volkov, Navalny's top aide, and politician Ivan Zhdanov.

The video features comedians Vladimir Kuznetsov and Alexey Stolyarov, better known as Vovan and Lexus, who have successfully pranked politicians, celebrities, and athletes around the world, and especially in Eastern Europe. The two co-host a weekly show on NTV, a Russian broadcaster owned by Gazprom-Media.

In the video, D66 MP Sjoerd Sjoersma asks "Volkov" what he thinks Dutch politicians can do to help their cause. "Can you all go on a hunger strike, just like Alexei?" Stolyarov answers.

Twenty minutes into the meeting, he further suggests that MPs can do an art performance and subscribe to Navalny's YouTube channel. "A donation to the campaign for the parliamentary election will also help. I will send you my bitcoin account afterwards."

GroenLinks MP Tom van der Lee also cannot contain his laughter when Stolyarov explains that he needs the money for his TikTok films, in which he does all kinds of dances.

"I dance all day long and young people see that I'm a cool guy. That's why I'm being persecuted in Russia."

The two have previously circulated photos from the event which caused Dutch parliament to open an investigation, according to the broadcaster NOS. The outcome of it is not yet known.

Leonid Volkov previously told NOS that the two comedians are well-paid employees of the Russian government who are undermining the opposition by spreading disinformation. "Zoom has been a rescue in the pandemic, but the Kremlin is using it as a weapon."

"If it makes people aware of the Kremlin's new techniques in this information war, the outcome of this whole story will be positive for European politicians as well as for us," he concluded.