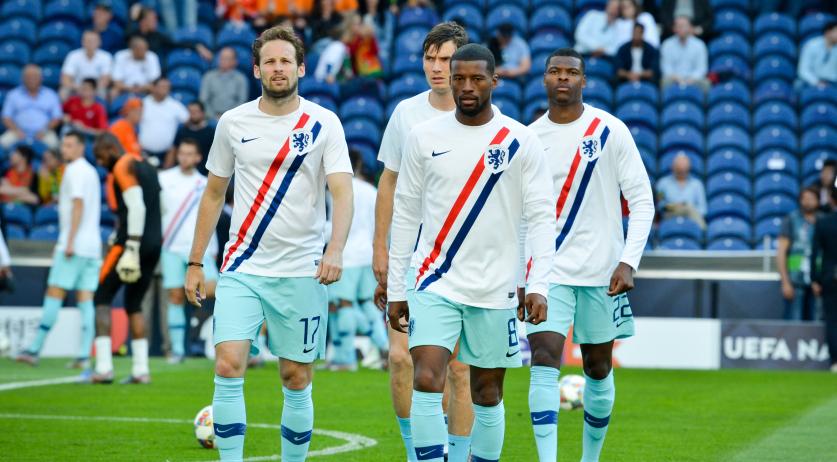 Dutch men's national football coach Frank de Boer has finalized his 26-man squad for the upcoming European Championship. A total of eight players were axed from the preliminary roster announced earlier this month.

De Boer was still making his final cuts on Wednesday before his 4 p.m. press conference to announce the selection. "I made the last decision today. Who was that? No, you don't need to know, but I did make a choice today. That was indeed a difficult one, but it always is," he said.

Tottenham's left-winger Steven Bergwijn was dropped from the Oranje team, marking the biggest surprise of the final squad. The 23-year old had a rough season in which he struggled to make an impact at Tottenham Hotspur.

"It is always difficult, because the quality of the players is very close to each other. Making choices is never fun, but it is part of your job. I did that, but it was not easy," he said.

Ajax’s 19-year-old Jurrien Timber will be marking his debut for the national team following the striking performance in the second half of the recently finished domestic league.

Veteran goalkeeper Maarten Stekelenburg, who played for Oranje in the 2010 World Cup final against Spain, was also picked as one of the three goalkeepers, ahead of Marco Bizot from AZ Alkmaar. At 38, Stekelenburg will be one of the oldest players when the tournament gets underway on June 11.

"We also want to be able to play a system with five defenders. In such a system, Promes is a good option in the position of wingback. He has already shown that during his time at Sevilla," De Boer stated.

Giving those players the bad news was not easy, but it was harder with those with whom De Boer has a closer relationship, like Kenny Tete.

The new squad will be captained by Georginio Wijnaldum, and Barcelona’s Frenkie de Jong and Juventus’s Matthijs de Ligt will be crucial to the Dutch hopes. It was previously announced that Liverpool’s Virgil van Dijk will not be joining the squad for the upcoming Euro due to an injury. Daley Blind is also recovering from an injury, but made the final squad.

The Netherlands will compete in Group C alongside Ukraine, Austria, and North Macedonia, with all of their group stage games taking place in Amsterdam. Oranje will open the tournament against Ukraine on June 13 at Johan Cruijff ArenA.

The Dutch team will take on Portugal and Georgia in two final friendly games before the championships scheduled for June 2 and June 6.