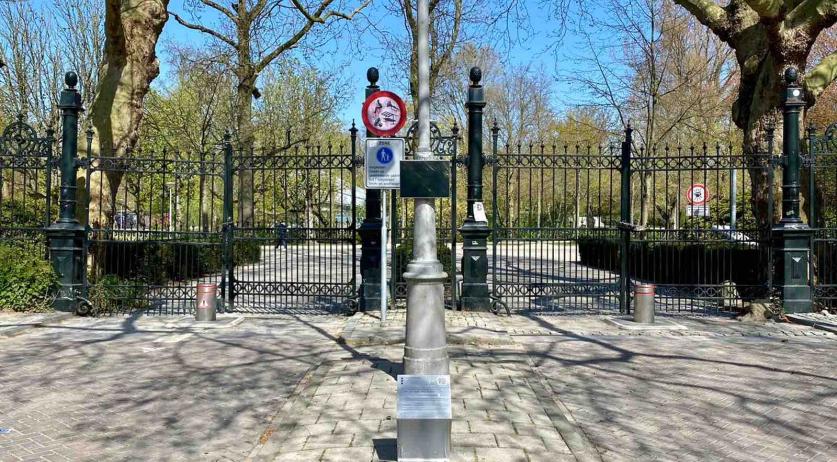 A simple mirror unveiled in front of the Vondelpark in Amsterdam for the country's Remembrance Day observances was placed in the same spot where a sign once coarsely stated, “Forbidden for Jews”. NL Times spoke with the artist behind the the new memorial, Niels van Deuren.

Van Deuren is an entrepreneur who moved to Amsterdam two years ago after many years living in Rotterdam. He wanted to create a piece of art which causes people to reflect on what can happen when society turns a blind idea towards intolerance and racism.

“I got the inspiration after the speech King Willem-Alexander gave on Remembrance Day," Van Deuren said. During the 2020 address on Dam Square, Willem-Alexander discussed Jules Schelvis, who was deported along with his wife from the Muiderpoort train station in Amsterdam Oost to the Sobibor extermination camp in 1943.

"Hundreds of bystanders watched without protest as the crowded trams passed under strict surveillance," Willem-Alexander quoted Schelvis as saying. The king went on to say that this was not the start of mistreatment.

"Sobibor started in the Vondelpark. With a sign: 'Forbidden for Jews'." That led to Jewish people forbidden to enter swimming pools, performing on stage, or even bicycling in the city. Then, they were banished from their homes and deported.

At every step, society ignored signs like that first one to appear outside the main gates of the Vondelpark.

“The mirror reminds us that we should not look away, but look ourselves in the eyes, and ask the question: ‘What will you do?’”, Van Deuren said.

It is also meant as a reminder that racism is not in the past. The creator pointed to recent events such as the murder of George Floyd in the United States, as an example.

“One of the factors that lead to his death was the racism within the police force. People knew about this and decided to look away instead of taking action.”