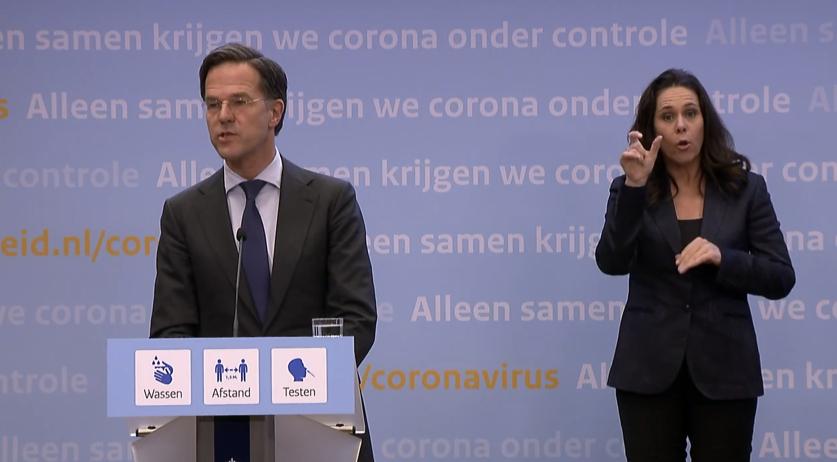 During the press conference, Health Minister Hugo de Jonge also gave an update about the use of Covid-19 vaccines, saying that the Janssen vaccine will be used from Wednesday. NL Times has published a separate article about that issue.

Dutch Prime Minister Mark Rutte said the country would press forward with the first step of a six-step plan to release the country out of lockdown, including the elimination of the curfew and the limited reopening of cafe terraces. He made the announcement during a 70-minute press conference on Tuesday, the same day that the number of Covid-19 patients in hospital care rose to its highest point in over a hundred days, and with a higher percentage of people having tested positive for the SARS-CoV-2 coronavirus infection.

“Last Sunday, the chairman of the Security Council, Hubert Bruls, spoke wise words when he said that we cannot get out of this crisis with zero risk," Rutte said during his opening remarks. "The risks must be justified, and that remains a balancing act for the time being. We must be careful: We owe that to people in healthcare, who are running double shifts, seeing their holidays disappear and are only running, running, running."

Calling it a "calculated risk, Rutte said, "It's not a gamble. We wanted to take step one of the opening plan when we have passed the peak. On the one hand, we see an average stabilization of the number of hospital admissions, and in the RIVM models we foresee a decrease in the number of daily admissions."

However, the RIVM said earlier on Tuesday that the reduced number of Covid-19 hospitalizations reported over the past week was due to an IT outage, and that complete figures were not available. Data from the agency also showed that the average number of daily coronavirus infections was continuing its two month upward trend, having only dipped down during Easter when fewer people were tested, and during a separate IT issue last week.

Both Rutte and Health Minister Hugo de Jonge insisted that the Netherlands had reached a plateau regarding the infections and the hospitalizations. De Jonge was questioned on this as te two figures this week were similar to figures in January, when the country extended the lockdown and introduced the curfew.

"The big difference with the figures in January is the much wider degree of protection that we now have thanks to vaccination," the health minister stated. "The vulnerable groups are much more protected, so that the risk is now acceptable."

During his remarks, the caretaker prime minister confirmed most of the information that already leaked out over the past week. Rutte announced six changes in total to the country's lockdown policy, the first being that the mandatory nightly curfew will be eliminated from April 28 at 4:30 a.m. The curfew was the first since World War II, and it has been in effect for about three months.

Rutte also said that bars, cafes and restaurants will be allowed to host customers for the first time in roughly six months. This will be limited only to outdoor terraces, which may be open from noon to 6 p.m. daily. "I would very much like to be able to eat on a terrace again in the evening, but that is still irresponsible. We also have to be able to maintain the flow of people." he said.

The terraces will be allowed to cater to a maximum of 50 people. There must be enough space for guests to be separated by 1.5 meters. Tables may be kept closer if a screen is used to separate them. Additionally, a table may host a maximum of two people if they are from different households. More guests from one household may sit together at their own table.

That will start on April 28, as will a rule change about household visits. People will be allowed to receive a maximum of two people per day, instead of only one. Rutte said he understood that two is still very few, but the Cabinet wanted to be cautious in their first step out of lockdown.

Rutte was not blind to the fact that the relaxations would take place on April 28, the day after King's Day. At also said it was the right thing to do, and relaxing restrictions earlier was not under consideration even "for a second."

Funerals held on or after April 28 will also be allowed to have 100 attendees, which is double what is currently allowed. Rutte also said that exams for driving licenses will also restart on that date.

The last change was a reconfirmation that higher education students will be allowed to attend classes in-person at least one day per week beginning on April 26. "We will continue to look at how we can send pupils and students to school more and more often," he said.

"The step we are taking is also limited. So it is not a gamble, but an acceptable risk," Rutte said.