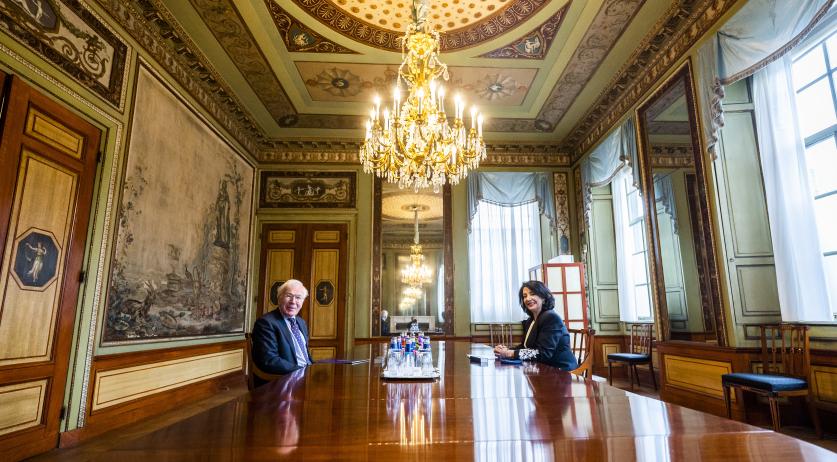 Labour Party elder Herman Tjeenk Willink was selected as to serve as the Cabinet formation informateur after a rocky start to the process of building a new coalition government a few weeks after elections were held in the Netherlands. Tjeenk Willink has been a prominent figure in Dutch politics since the mid-eighties, and served as an official informant to Parliament during the formation of all three Cabinets of Mark Rutte, and the first of Wim Kok in 1994.

He was largely credited with finding the legal argument to justify the formation of Rutte’s first government, which did not have a majority of support in Parliament.

Following the last week’s political drama, members of the Twede Kamer, the lower House of Parliament, asked for "a respectable independent ‘informateur’ to take on the role as a single negotiator” instead of the four scouts which preceded him. Just days into meetings with party leaders in the Tweede Kamer, a note provided to scout Kajsa Ollongren was photographed revealing that a critic of the outgoing Cabinet was discussed during one of the meetings. The note suggested that the popular CDA parliamentarian, Peter Omtzigt, would be enticed to leave national politics.

More notes released by Ollongren and her colleague Annemarie Jorritsma showed that Prime Minister Mark Rutte discussed Omtzigt with the scouts, which he later denied remembering. The two scouts resigned, as did the two which followed them. Rutte narrowly escaped when a vote of no confidence failed in the Tweede Kamer. However a majority voted to censure him for misleading Parliament.

Tjeenk Willink was asked to bring order to the process, with only far-right parties FvD and PVV opposed. The 79-year-old Labour member was named an honorary Minister of State after serving ten years in the Senate, including six as Senate President.

Shortly after the elections, he gave his own vision for the upcoming formation. He said on political talkshow Buitenhof that the main focus should be on addressing the most important issues first, instead of the power issue of who rules with whom.

His first official report to Parliament is due before April 27.

Earlier in the day, all political leaders met for the first time after Rutte was censured when they joined Tweede Kamer chair Khadija Arib to discuss the ongoing process. Leading up to that meeting, PvdA leader Lilianne Ploumen said that Mark Rutte has "a big problem" in the upcoming process with a number of parties having in one way or another saying they have lost confidence in Rutte.

Only the Rutte’s VVD, D66, CDA and ChristenUnie, the outgoing coalition partners, were in Rutte’s corner for the no-confidence vote. However last weekend, the leader of ChristenUnie, Gert-Jan Segers, ruled out taking part in a new government headed by Rutte.

Finance Minister and CDA leader Wopke Hoekstra also said his party is not enthusiastic about remaining in the coalition and was looking to regroup as an opposition party.