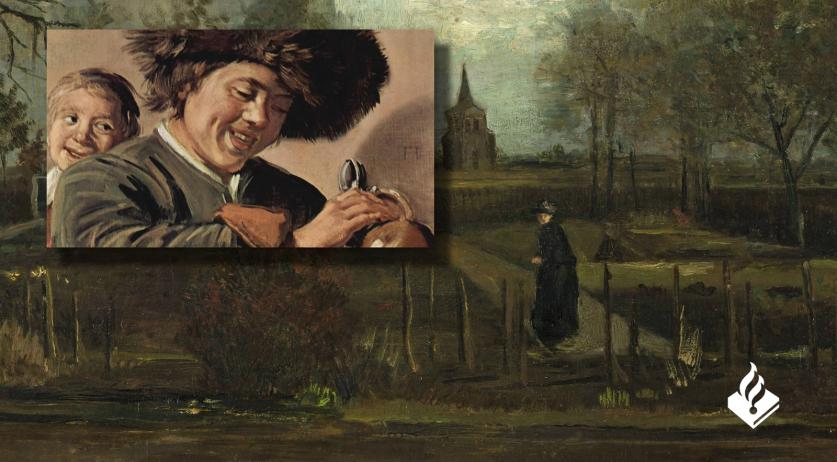 Police in the Netherlands arrested a 58-year-old man suspected of breaking into two museums last year in which paintings from Vincent van Gogh and Frans Hals, valued at a combined total of 21-million euros, were stolen. The man was taken into custody at his home in Baarn, Utrecht on Tuesday morning, but neither painting has been recovered.

The Van Gogh painting, The Pasonage Garden at Nuenen, known in Dutch as De Lentetuin, was swiped first. Painted in 1884, it was stolen from the Singer Laren museum during the early morning hours of March 30, 2020 on what would have been the artist's 167th birthday. Surveillance video showed that a thief used a sledgehammer or a similar blunt object to smash a glass door at 3:15 a.m.

He was then caught on camera walking out with the six-million euro painting in one hand, and the blunt object in the other. The painting was loaned to the Singer Laren by the Groninger Museum.

Five months later at about 3:30 a.m. on August 26, "the painting 'Twee lachende jongens' by painter Frans Hals was stolen from the Hofje van mevrouw Aerden in Leerdam," police said. Valued at approximately 15 million euros, it was the third time that the painting was stolen, having also been taken in 1988 and 2011.

Police believe the suspect they arrested on Tuesday carried out both burglaries. His home in Baarn is just ten minutes by car from the Singer Laren, and less than 45 minutes away from the Leerdam museum near the border of Utrecht and Noord-Brabant.

Two months ago, the Telegraaf reported that 38-year-old cocaine trafficking suspect Peter K. may have been in possession of the stolen Van Gogh. Before that, Arthur Brand, an investigator who specializes in art theft and fraud, said he had been trying to negotiate the return of the painting with someone in K.'s inner circle. Brand said he believed the Van Gogh was purchased on the black market for 400 thousand euros.

On Twitter, Brand praised the work of Dutch police, calling it a "huge" success for them.

"The search continues. This arrest is an important step in the investigation," police said. "If you have information and have not yet shared this with the police, please do so as soon as possible."