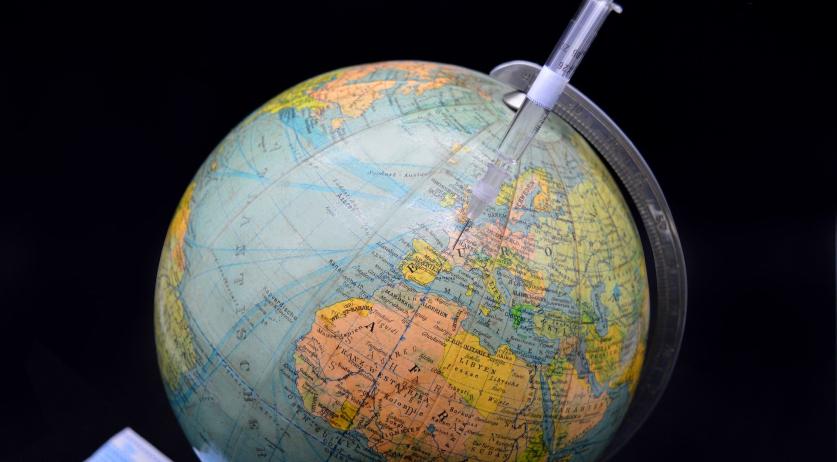 The EU’s vaccine distribution delays could be solved through voluntary collaborations established by pharmaceutical giants. However, civil society and several EU countries are calling for the liberalization of patents, to be able to independently produce doses and ensure vaccine coverage for the largest possible number of people. The second part of Stefano Valentino’s report on the monopolistic practices of pharmaceutical companies

Despite AstraZeneca’s repeated delays in delivering vaccines to the EU as agreed, European Commission President Ursula von der Leyen does not regret the fact that the contract signed with the Anglo-Swedish company gives the latter exclusive rights to the intellectual property of the vaccine. This means that the company has the power to prohibit others from producing the quantities it cannot deliver.

"The delay in the supply of vaccines is not related to intellectual property, but to insufficient production capacity that affects in particular the implementation of purchase contracts concluded by the EU," said Miriam Garcìa Ferrer, spokesperson for European Commission trade issues: "We agree with the proposal of Ngozi Okonjo-Iweala (the new Director General of the World Trade Organization ), according to which voluntary collaboration between companies should be facilitated to use all production capacity, including in developing countries".

An initiative to liberalize the production of drugs against the coronavirus for the duration of the pandemic was launched at the WTO last October by India and South Africa. Specifically, the two countries have proposed the suspension of certain parts of the International Treaty for the Protection of Intellectual Property (TRIPs, an agreement signed in the framework of the WTO).

However, delegates from the European Commission's Trade Directorate at the WTO continue to oppose the proposal on behalf of the EU 27. The initiative is supported by nearly 80 low-income countries who see it as the only way to guarantee sufficient doses quickly. At the March meeting of the TRIPs Council, where decisions require consensus, the discussion was postponed again (until April or June) due to the obstruction of rich countries. Opposing countries also include the United States, Canada, the United Kingdom, Switzerland, Australia and Japan: strongholds of pharmaceutical lobbies that have been hoarding doses of the most promising vaccines, and pre-purchasing around half of them, even though they represent less than 25 percent of the world's population, according to Unicef data.

The position against the WTO expressed by the Commission is agreed by all Member States, who previously discussed and supported it behind closed doors through their technical delegates in the Council’s Committee on Trade Policy. This can be seen clearly in the minutes of the meetings held from January to February, obtained by the NGO Corporate Observatory Europe.

Production in the hands of a few

The Commission for the Industrial Development of Covid Vaccines Task Force, under the leadership of Commissioner Thierry Breton, has taken charge of promoting inter-company agreements within EU territory, without touching the question of patents. In fact, Big Pharma are subcontracting various stages of their production to other companies scattered throughout the Old Continent. The subcontractors, however, have no license to manufacture and distribute the vaccine independently: this remains in the hands of patent holders.

Instead, real licenses have been granted to non-EU producers: AstraZeneca has issued them to operators in India, Brazil, Japan, South Korea, China, Australia, Spain, Mexico and Argentina, with the obligation to sell only in limited geographical areas. This means they are prohibited from supplying the more lucrative European market, where the multinational maintains exclusivity. In short, it is always the same giants that control supply.

"There is ample unused production capacity everywhere, but we are hanging on to a few factories that will never be able to supply all that is due," says Massimo Florio, Professor of Public Economics at the University of Milan. "It makes no sense for pharmaceutical companies to have exclusive production rights; they might as well be remunerated through royalties received under licenses issued to third parties." According to a report by the Tony Blair Institute for Global Change, only a small proportion of the world's 16.7 million liters of production capacity for vaccines, therapeutics, antibodies and antivirals is used for Covid-19.

"It is imperative to share patents and technologies outside the narrow partnerships led by the pharmaceutical giants, otherwise you can't expand production enough to meet global demand, even in the less affluent regions," protests Sara Albiani, consultant to the NGO Oxfam.

Similar requests were already made in the summer of 2020 by the European Parrliament, which voted on March 11 for an amendment to its report on the annual economic strategy to reiterate to the Commission the urgency of overcoming the obstacles to the production of Covid vaccines due to patents.

At the same time, pressure from civil society is increasing: a group of 40 NGOs published an appeal to EU governments for the liberalization of patents on the eve of the last meeting of the TRIPs Council. Last November a European citizens' initiative on the right to treatment was launched, with over 100 thousand signatures so far. 1 million are needed by 1 May for the European Commission to consider the proposals.

"The partial suspension of TRIPs or even the issuance of compulsory licenses that the EU Treaty authorizes in situations of health crisis, moreover with very onerous procedures, would not be sufficient. In fact, to produce vaccines any third party would still need active collaboration from the owners of the technologies in order to acquire sufficient know-how”, says Ellen 't Hoen, Director of the Medicines Law & Policy centre. According to 't Hoen, "governments should have bound pharmaceutical companies to this kind of commitment in exchange for public funds for research and development, instead of relying exclusively on spontaneous initiatives on their part, but there is a sort of political psychosis that fears that the industry will stop innovating if you make life difficult for it".

Vice-President of the European Commission, Valdis Dombrovskis, would seem to have confirmed that fear. In answer to the question asked in December by a group of MEPs on the controversial Indo-South African proposal to the TRIPs Council, Dombrovskis said: "Such a step would risk limiting the incentives for research into innovative pharmaceutical products to meet new health challenges".

Not everyone agrees with this view: "This time, the argument about patent protection as a reward for investment does not entirely stand up", says Rachel Thrasher, researcher at the Global Development Policy Center. "Governments have taken an active role in funding (although the EU has paid relatively less than the US and other international bodies, giving it less leverage for negotiation), not to mention that companies have a guaranteed market all over the world, ensuring substantial profits even if part of the money invested comes from their own pockets". To immunize the entire global population will require up to 14 billion doses, quantities that could multiply if, as many scientists predict, immunization coverage will be limited in time, requiring repeated recalls.

To reconcile public and private interests, the experts we interviewed propose that governments concentrate large-scale production in a few joint centers operating under contract; or, alternatively, that they multiply the number of technology licensees by collectively compensating patent holders. "By now it is difficult for states to converge on an appropriate mechanism at the global level in the midst of a disaster where all of them are competing to procure medicines for their citizens, it should have been thought of earlier," explains Michelle Childs, Policy Activism Coordinator at the Drugs for Neglected Diseases Initiative. "I hope that leaders have learned their lessons and will make wise choices at least in the future," adds Clemens Martin Auer, outgoing Co-Chair of the EU Vaccine Task Force.

This investigation was produced in partnership with the European Data Journalism Network (EDJNet) as part of the project “Who is cashing in on the Covid-19 pandemic”, with the support of Investigative Journalism for The EU. 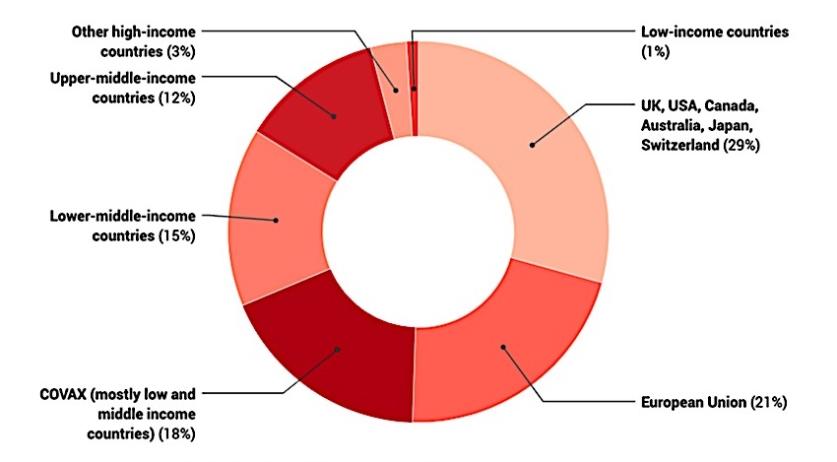 Share of doses of the most promising Western Covid vaccines as of March 2021 - Source: EDJNet via Airfinity at Datawrapper - License: All Rights Reserved
Image 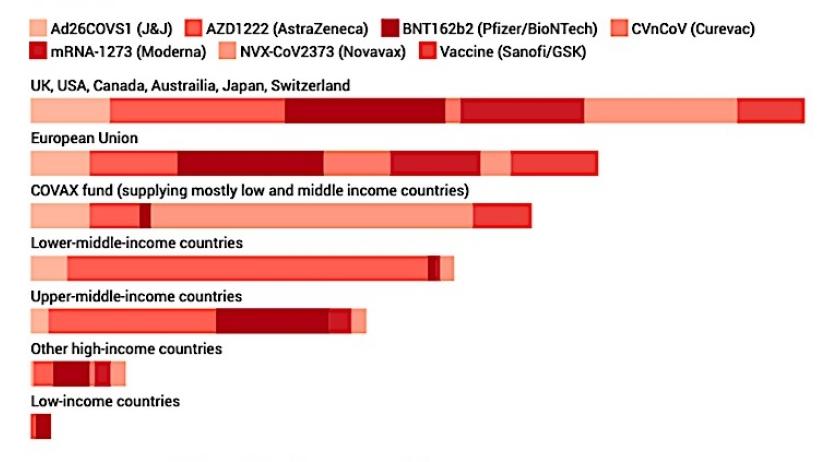 Doses of most promising Western Covid vaccines secured by the EU compared to the rest of the World - Source: EDJNet via Airfinity at Datawrapper - License: All Rights Reserved
Image 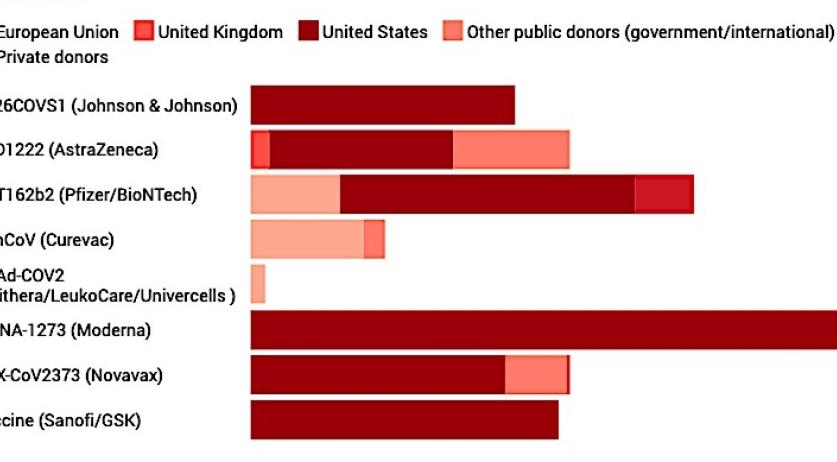 Funding of the most promising Western Covid vaccines ordered by the EU - Source: EDJNet via Airfinity at Datawrapper - License: All Rights Reserved