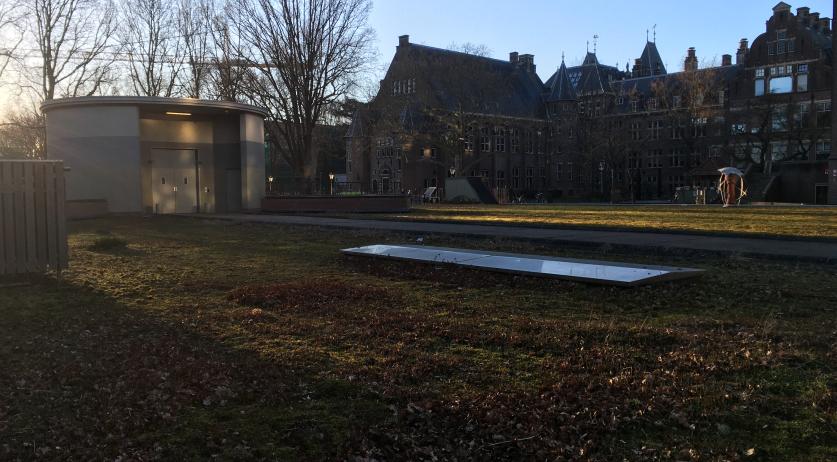 The Royal Tropical Institute (KIT) has made plans to construct a 1,500 square meter smart blue-green roof, one of the first three projects to receive a subsidy from the city of Amsterdam for such a project. The new roof will actually be at ground level, topping a portion of the massive underground climate controlled storage for the Tropenmuseum.

Blue-green roofs, as the name illustrates, are roofs that use a mix of blue and green technology. Blue roof technology aims to regulate how much rainwater is stored and when it is released. Green roofs use plants to absorb rainwater, as well as offer more living space for animals. Ideally, green roofs are usually also equipped with solar panels.

The combination of blue-green rooftops is intended to help cities withstand more extreme weather conditions, such as intense rainfall and drought period. One of the main goals of blue-green roofs is to prevent sewer systems from overflowing when during particularly rainy seasons.

“This roof is an important step in advancing the sustainability of the KIT building," said the KIT's Chief Financial Officer, Louis van den Berghe. "We hope that this blue-green roof helps to keep our site and the surrounding area green in the summer.”

The project is partially subsidized by the RESILO-project which aims to build around 10 thousand square meters of blue-green roofs in Amsterdam. 500 thousand euros in subsidies have been made set aside for private individuals who construct a roof larger than 200 square meters.

The roofs are all meant to be connected in a smart system that manages the amount of water stored on the roofs based on the weather conditions. Eighty percent is set to be constructed on social rental homes which are often flooded during heavy rainfalls.

Alderman Laurens Ivens says “This ever-expanding network of smart blue-green roofs is a good example of measures we can take to better prepare our city for more extreme weather. We need everyone to use as much surface area of the city as possible to arm ourselves against the extreme downpour, heatwaves and periods of drought.”

The Tropenmuseum storage is currently partially covered by a garden which runs up against the fence and gate at the northeastern corner of the Amsterdam Oosterpark.