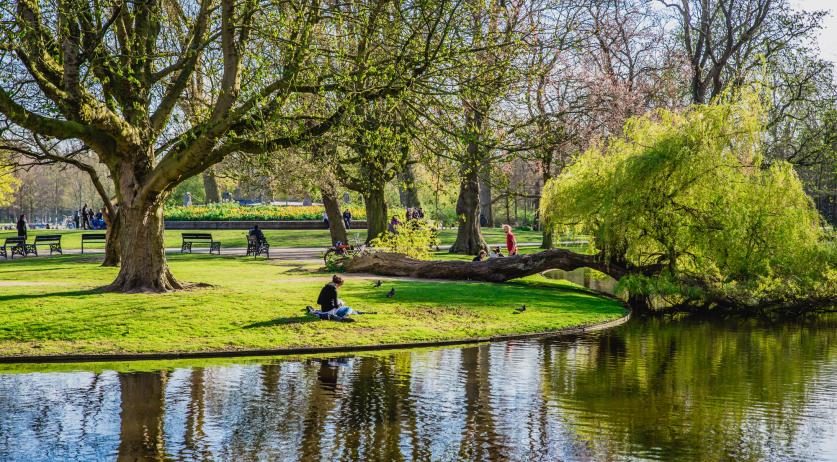 From today, the side entrance of the Vondelpark in Amsterdam will remain closed in an attempt to limit crowds, Amsterdam mayor Femke Halsema decided in consultation with the local police and Public Prosecutor after thousands of people gathered in the park on Wednesday evening, NOS reports.

There will also be extra supervision on the number of people in the park. If these measures don't limit the crowds sufficiently, the park will be closed completely. "The Vondelpark will remain open, because public space in the city is scarce. Closure is an extreme measure if the behavior of visitors gives cause to it. The measures will last indefinitely," Halsema said.

Thousands of mostly young people gathered in the Vondelpark on Wednesday evening. The park was so full that maintaining social distancing was impossible. Visitors were asked to leave an return at a quieter time. When the police eventually started clearing the park, officers were pelted with bottles. Two people were arrested. A bystander was hit with a bottle and taken to hospital. The park was empty by around 7:30 p.m.

Article continues after the videos

Another day of large parties at the Vondelpark in Amsterdam. pic.twitter.com/gaF23wMxUa

Meanwhile Amsterdam #Vondelpark 😂 There is no corona in Amsterdam I think. 🎊🎉👯‍♀️🍻 pic.twitter.com/MgxzfR71kd

Other cities also dealt with overcrowded parks as people streamed outside due to the nice weather. In Tilburg the Spoorpark was closed by the police and municipality. Hundreds of people were in the park, according to Omroep Brabant.

The police and mayor Theo Weterings said they understand the need to be outside, but appealed to locals to stick to the coronavirus measures. "The sun shone and everyone was in a good mood. A pity it had to end like this," a police spokesperson said to the broadcaster.

In Utrecht there were crowds in the Wilhelminapark, the Griftpark, and Lepelenburg. Police officers asked people to leave at around 6:00 p.m. "We are aware that people are over the coronavirus,"  a police spokesperson said to RTV Utrecht. "But the rules also apply outside."

In Groningen, crowds gathered in the Noorderplantsoen until they were dispersed by order of the mayor. "People were reminded that the measures are still in effect," a spokesperson for the municipality said to RTV Noord. According to them, there was no evacuation and the crowds left in an "extremely relaxed atmosphere".