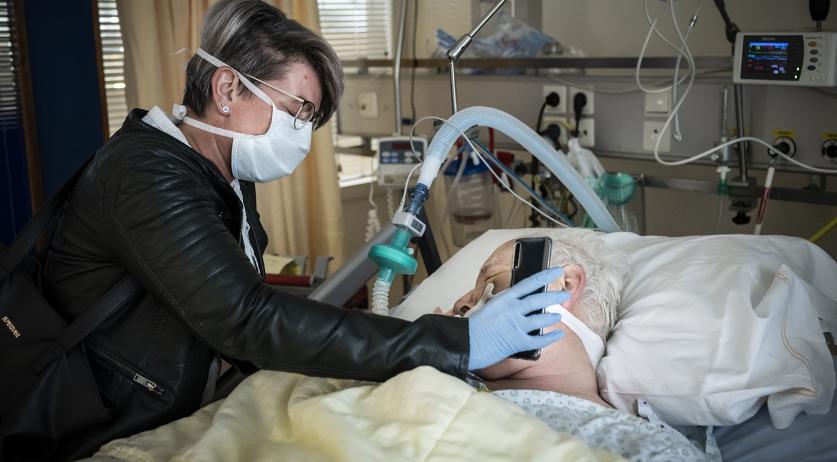 Photographer Kees van de Veen was awarded the Zilveren Camera 2020 for his “intimate” photo series on Piet Frannsen from Tegelen who died after battling the coronavirus during the first wave.

Van de Veen accompanied Frannsen and his family during his stay at the ICU up until shortly after his death. Franssen had lost his wife only recently. He died on April 16, 2020, at 73-years-old.

“He conducted himself really discreetly and respectfully throughout the photo series”, a family member of Franssen said in a video message to Van de Veen when he won the prize.

“This is what last year was all about: saying good-bye to your loved ones too early”, the judges said in a press release. “Especially the picture where the daughter shortly before her father's death is holding a telephone to his ear so that he can talk with his grandson is deeply impressionable. The pain that we see in the weekly statistics is thereby given a face.”

According to jury member, Natalia Toret, the peculiarities of the past year were to be seen in many of the submissions. “Many pictures of empty streets and abandoned squares. Photographers were forced to work with literally more distance to their subjects.”

“I really did not expect it”, Van de Veen said to reporters from NOS when he was awarded the prize.

Van de Veen himself said he is grateful to the family of Frannsen and the hospital for letting him follow the tragic journey of one of their coronavirus patients. “It was incredible how open they were in allowing me to partake in such intimate moments.”

The Zilveren Camera award has been around since 1949 in the Netherlands and is given to the best press photo or photo series of the year. Last year Eddy van Wessel won with his photo documentary of terrorist organization ISIS in Syria.