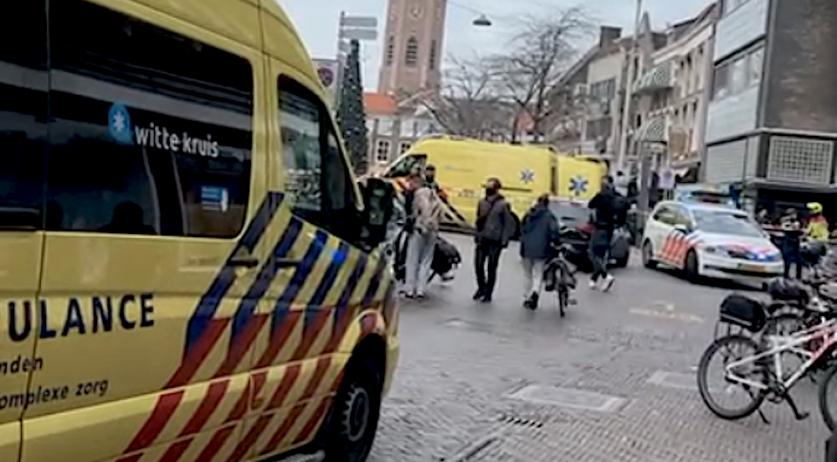 Paramedics and police gather at an Albert Heijn in The Hague where two people were stabbed and the store was set on fire. 2 Dec. 2020 Timo Salminen Supplied to NL Times
Crime
Weird
The Hague
Zuid-Holland
stabbing
arson
Albert Heijn
politie
Share this:

Update, 3 p.m., 2 December 2020: Police in The Hague said that one person was taken into custody.

Two people were injured in a stabbing at an Albert Heijn on the Grote Marktstraat in The Hague on Wednesday afternoon. Witnesses said the suspect also set fire to the supermarket before running away.

A heavy police presence in the city was deployed. Authorities said they were searching for a man in his late twenties or early thirties with olive complexion. He was last seen at about 12:10 p.m. running towards the Bijenkorf wearing a black jacket, and a track suit with gray shoes. One man was in custody hours later. "His role in the stabbing incident and the fire is under further investigation," Hague police stated.

The incident was reported just after 12 p.m. The motive of the stabbing was under investigation but it was not initially believed to be a terrorist attack, police told broadcaster NOS. Both victims were transported to an area hospital, and at least one had a high level of consciousness. At least one of the victims was believed to be a store employee.

“People were running out of the supermarket. I heard someone had thrown alcohol on the floor and lit it,” the owner of a neighboring fashion retailer told Omroep West. Witnesses claimed the man grew angry, ripped a bottle of alcohol from a shelf, smashed it on the floor and ignited it.

“There was panic everywhere,” said Kika Buurman, the owner of the Rootz restaurant nearby where those involved in the incident were gathered by authorities. “People ran outside and there was complete chaos.”

At least five ambulances were dispatched to the scene in the 45 minutes that followed the stabbing. The fire department extinguished the blaze by 12:30 p.m., though bystanders said there seemed to be a great deal of smoke.

“It is hard to accept that there are still people today who do such a nasty thing," Buurman said.

Huge police operation at Grote Markt in the #TheHague. You may want to avoid the area. pic.twitter.com/daTShQREtJ