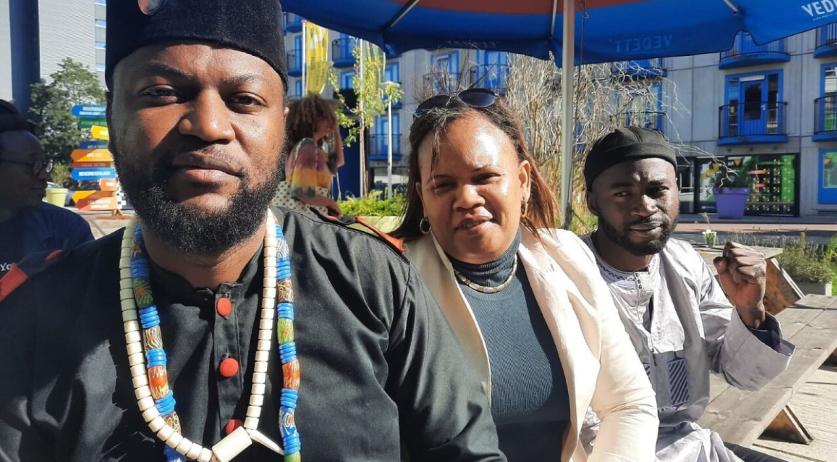 By Marvin Hokstam, of Afro Magazine, for NL Times

Mwazulu Diyabanza Siwa Lemba was twelve years old when his mother told him how either Portuguese or Dutch colonialists invaded his great-great-grandfather’s village in the 1800’s. “My great great-grandfather was governor to the king of what was back then known as the country of Zaire; he served as the king’s substitute when the king was not available," he said during a sit-down interview in Amsterdam just ten days after he was arrested for walking out of a Dutch museum with a statue of Congolese origin which was part of the museum's collection.

"He was an important man," Mwazulu continued. "When the Europeans invaded, they snatched all his belongings from him; his bracelets, his ceremonial scepter and the hide of a leopard that had been given to him by the king to show that he was the king’s representative. When my mom told me how they ripped the bracelets off his arms, I knew from that moment on that I wanted to retrieve them,” he said.

Mwazulu has been trying to retrieve his family’s heirlooms since he was 17. “I have not found them yet, but I am tireless in my pursuit of that part of my heritage.”

Meanwhile he goes around making a point about cultural treasures that were stolen from African nations and put on display in museums in Europe and the United States. On September 10, he and two other members of the organization Unité Dignité Courage (UDC) walked into the Afrika Museum in Berg en Dal, and took an artifact in display. They streamed the entire incident on Facebook Live and people around the world watched as Mwazulu, clad in a long black jacket and wearing a black beret, picked up the piece, pressed it dearly to his chest and walked out of the museum. The stream ends when the police screech in with sirens blaring, snatch the statue out of his hands, and shackle him.

Local newspapers ran headlines that said “Activists steal a sculpture from Afrika Museum,” but Mwazulu disagreed with that notion. “This is not any sculpture; it is part of our history and of the inheritance our forefathers left us. This was not supposed to be on display here. We are not thieves who came to steal something. You don’t ask permission to take back what was taken from you, now do you?”

At the interview in Amsterdam Zuidoost, he appeared equally determined as he was during the live stream from inside the Afrika Museum. He wore the same black jacket with red epaulettes on which the letters UDC in black rest under the outline of the continent of Africa. On his head: a black fez, a button fastened to it with the same letters and African map. “Unity, Dignity and Courage,” he said softly, tapping his left shoulder lovingly with his right hand.

“I always wear them on my shoulders.”

A thick ivory necklace dangled from his neck, with two pendants that look like lion fangs. On one of the fingers on his right-hand he was wearing a square golden ring with Swahili symbols carved into it.

His "comrades", Laehtia Babin and Sore Brama, sat alongside him during the interview. They too took part in the Berg en Dal mission. All three of them speak French, but each hails from a different country on the African continent, Congo, Senegal and Togo, but they sidestep the question about where exactly they live at the moment. “We are all over,” Mwazulu said mysteriously.

His eyes teared up when it dawned on him how much his mission to retrieve African artifacts from western museums could mean to people who are descendant of Africans who were stolen from their homelands and enslaved.

“I never realized that when I took that piece from the Afrika museum, people could literally feel it physically when the cop snatched it back out of my hands. To descendants of the enslaved, that felt like that moment when their ancestors were snatched out of Africa. This makes me even more determined to pursue my task,” he said through tears.

Berg en Dal was not the first museum the UDC targeted, nor are museums their only target. Mzwazulu shared a 14-point manifesto in which the organization speaks of removing French armies from African countries, of stripping away European  rights to mine Africa’s natural resources and of stopping Europe’s economic dominance over Africa.

Mwazulu, 40, relayed that he has dedicated his life to these tasks. He said that he has traveled from when he was 17 years old to conduct research in Europe, the US and the Caribbean into what all has been stolen from Africa. “Whenever I spoke to people in Haiti, the Dominican Republic and Trinidad & Tobago, it dawned on me how much of our history, our dignity and our future was taken from us. When my mother told me the story of my great-great-grandfather, that was a moment of clarity. I also realized that it wasn’t just me who this concerned,” he said.

The UDC manifesto features a list of museums throughout Europe and the US, that hold pieces which were illicitly obtained. Mwazulu emphasized that throughout the West there are artifacts of African origin on display that hold deep significance to African peoples. The Berg en Dal mission was part of an ongoing, well thought out mission, he said.

“That is also a point in our manifesto. These are not simple pieces of art, but cultural expressions of our ancestors that play a role in who we are. They are not meant to be on display in museums, because in the hands of our people they hold significant spiritual and anthropological value … and economic value as well. These pieces are meant to give access to good fishing grounds and fertilize the fields. They are good for our mankind.” He agreed with the museum that the pieces are priceless, but then with his own nuance. “They don’t even know. The value of these things exceeds any possible appraisal.”

Then a huge grin cracked through his beard when he spoke of June this year, when he also took a piece on display at Quai Branly Museum in Paris and started to walk out of the building. He was arrested then too. He was scheduled to appear in front of a judge in Paris in October, on charges of larceny. In January he will appear in front of a judge in Nijmegen, for accusations of theft at the Afrika Museum.

He shrugged off concerns for the legal challenge that await him. “We are ‘warriors’”, he said nodding acknowledgement at his comrades beside him. “We have a duty to do this and we are prepared for anything. This is not about us and we are prepared for anything. We are doing this in the spirit of people like Patrice Lumumba," he said in reference to the Congolese leader who served as the country’s first Prime Minister until he was ousted from office in 1960, months before he was assassinated. "Every part of our heritage that has been stolen from us, must return home. If not today, then tomorrow.”

He does have a good feeling about the trial in the Netherlands. “After they arrested us and took us to the police station, we were interrogated and then we told them what drives us. They were touched by our story. And then the lawyer who was appointed to us made use of that to force upon them that we acted on our right to that sculpture that we took. We have a good feeling about her,” said Mwazulu.

But he also shrugged at the reports that the Afrika Museum has said that it is willing to research “the possibility of restitution of objects.”

“We did hear that they said that, but they have not approached us directly. They have to save face of course … I guess we’ll see. It is nice to know that there is a movement to decolonize the museums, but what is of greater importance to us is that they -the Europeans, the West-, acknowledge that they made mistakes and that they give everything back that they have stolen. In the meantime, we will continue taking back our belongings from museums on our list. We are not done yet. It would behoove them to come talk to us.”