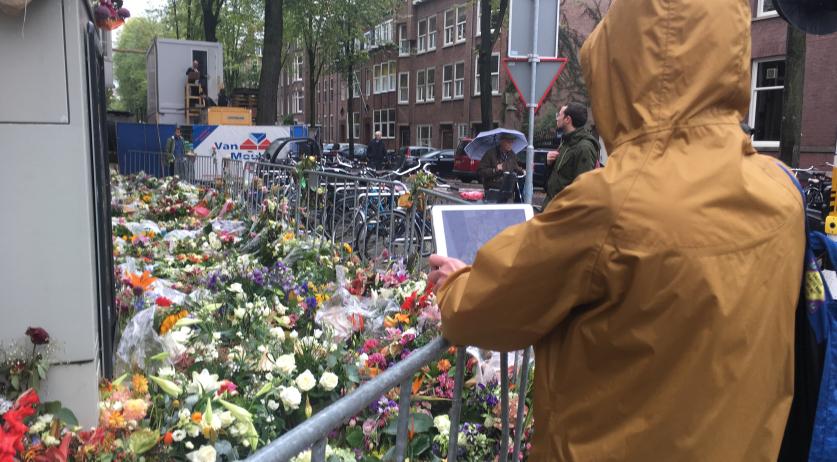 On 18 September 2019, defense attorney Derk Wiersum was shot dead outside of his Amsterdam home. A year later, defense attorneys across the Netherlands, but in Amsterdam in particular, are still shaken by their colleague's murder and the consequences it had for their profession.

Wiersum was shot dead, in front of his wife, as they left their home in the Buitenveldert neighborhood in Amsterdam. He was representing Nabil B. - a criminal turned police informant in the so-called Marengo process. The case revolves around a large number of assassinations allegedly committed by Ridouan Taghi and the drug-centered gang around him. The Public Prosecutor believes that Wiersum's representation of B. is why he was killed.

Today a number of lawyers will commemorate Wiersum. Some, including the Public Prosecution Service in Amsterdam, will hold a minute of silence at 11:00 a.m. Others are hanging flags at half-mast today, according to Het Parool.

According to the Volkskrant, the day of Wiersum's murder has become known as the "September 11 of the Dutch judiciary" - the day that lawyers, judges and prosecutors lost their peace of mind. In the immediate aftermath, some considered quitting their profession. And advertisements for bullet-proof vests and security guards appeared in their magazines.

A  year later "that acute feeling of insecurity and threat has decreased", Amsterdam dean Evert Jan Henrichs, supervisor of the Amsterdam lawyers, said to the Volkskrant. "But the carefree-ness of criminal defense lawyers is still gone. People are more likely to look over their shoulder and struggle with the idea that a colleague was murdered because he was doing his job."

Lawyer Robert Malewicz told the newspaper that he wasn't ever really afraid, but did become more alert. "I used to take almost every case blindly. Now I look much more closely at the context: to which criminal organization does the suspect belong and what is the background? I have already refused cases because of this." He thinks this is a permanent consequence of Wiersum's murder. "Previously, the thought that you could be killed because of your job just didn't come to mind."

Lawyer Micha Jonge Vos said the same to the newspaper. He doesn't envy his colleagues in the Marengo trial. "I would think three times if there were a similar case in which I was asked to assist a suspect. Before, I would've said 'yes' right away. Now I think I would say 'no'."

Another change brought on by the murder, is a "kind of copycat behavior", Henrichs added. "Lawyers who are threatened and get it thrown at their heads that not Wiersum, but they should have been murdered." Over the past year, Henrichs received eight such cases that he considered serious enough to call the Public Prosecution Service about. "Before 18 September 2019, this hardly happened at all."

Veerle Hammerstein, a friend and colleague of Wiersum who worked with him for years, spoke about the Amsterdam lawyer on Jinek on Thursday. "I still miss him every day," she said. "As a person, as Derk, as my helpline that is no longer there." After his death, Hemmerstein often found herself still looking for him. "I often ran into him in court. I'd see his blond curls sitting somewhere and walked over to ask him a question or have a chat. I noticed in the weeks after that I was looking for him."

She too feels that Wiersum's murder had a permanent effect on the profession of defense attorney. "The pleasure in the profession has been taken away from us. The shine has gone off a bit."

Last week Minister Ferdinand Grapperhaus of Justice and Security informed parliament that he plans to increase the maximum punishment for people who threaten "toga wearers" to four years in prison. This does not only apply to threats to lawyers, prosecutors and judges, but also mayors and other administrators. It is part of his package to better combat organized crime.

Wiersum's murder did not only leave defense lawyers shaken, but also the rest of the Netherlands. King Willem-Alexander mentioned Wiersum by name in his annual Budget Day address earlier this week.