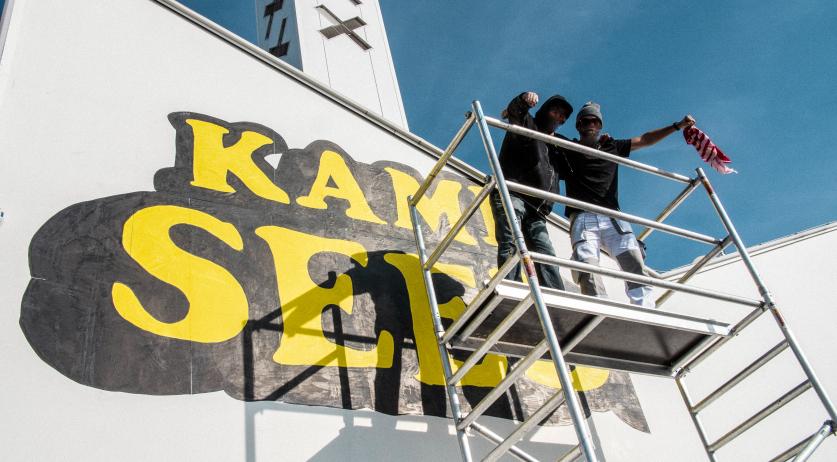 “What an honour for us to get involved in this project. Van der Laan really deserves this spot in the part of Amsterdam where he lived a long time,” Kamp Seedorf told NL Times a few days after their permanent tribute to Eberhard van der Laan was unveiled in Amsterdam West. The popular mayor of the Dutch capital city died from lung cancer less than three weeks after he announced his decision to step down from office with a goodbye letter that prompted thousands of city residents to rally outside his home.

Rumoured to have up to 10 members at a time, Kamp Seedorf started in the spring of 2010 at the Almere home of one of the four main members. Van der Laan’s tribute, titled Damsko Strijder, is just one of the art collective’s string of successes they never thought they would achieve as street artists. Individually anonymous to the rest of the world, the collective usually has a steady rotation of like-minded street artists working with them at any given time, including Eus.

“We try to get the main group as tight as possible, it's hard to work with people you don't know that good, especially with the illegal work we do,” he said. “You really have to trust each other.”

Trust and the love of football, hip-hop, and graffiti is what brought this band of street savants together nine years ago. When Eus, Clyde, Bas, and Mike started Kamp Seedorf they knew they didn’t want the group to work on anything that’s political or message-driven. Street-art should be fun. Their first piece was an ode to Suriname-born Dutch midfielder Clarence Seedorf in an A.C. Milan jersey placed near the Almere Muziekwijk train station. Another early piece was of Stanley Menzo in a bright yellow shirt, placed on Wibautstraat, often called “the most ugliest street of Amsterdam.”

With members largely from Almere and Amsterdam, they took their name from the star footballer who they’ve repeatedly said represents their group’s mentality  – misunderstood, just like the city of Almere. Often dismissed, Almere has a fertile foundation for growing talent and creating bonds, Kamp Seedorf stated, adding:

“Everyone in the group has the same interests and in a city like Almere you'll easily get to know each other because there aren't that much spots to come together.”

When they do get together Kamp Seedorf is a force moving through cities with guerilla-style precision and sleuth-like anonymity. They were labeled as the “Banksy of Football” early in their career and the juxtaposition came up once or twice in the media throughout the years, but the group refuse to subscribe to the comparison. “We have a totally different style of making art. Also, Banksy is way more serious and political than us in his work,” they added.

As their portfolio of work grew from footballers to various hip-hop artists, and other iconic figures, the mainstream art world began to take notice. By 2016 Kamp Seedorf was featured in the Amsterdam Museum. Their portrait of a young Clarence Seedorf was on display for a year.

The highlight of their career was the large mural they did in 2018 of Kraftwerk, Gabber, Ghostface Killah, Ali G, and Leafs (“A classic combination”) on top of the A'DAM Toren, overlooking Amsterdam from the city’s Noord borough. But from their extensive portfolio, one piece they will be remembered for throughout the Netherlands falls under a banner they prefer not to touch – politics.

👑ON TOP OF AMSTERDAM!! Our biggest and highest piece so far, on top of the A'DAM Toren. Enjoy your ADE party peopleeee!🍺🥃🍸🍷

When Van der Laan announced in 2017 he had lung cancer Kamp Seedorf put their fun-art-only mantra aside for the popular politician, and Damsko Strijder came to life: “The oldest guy of our group, who also used to be the most fanatic Ajax supporter of us came up with the idea.” The group unanimously agreed that they should pay tribute to Van der Laan and work on the painting began immediately. “When it was ready it felt like the painting needed some color. That's when we added the Ajax scarf.”

That same night they placed it at the Wibautstraat.

Since then Damsko Strijder was remade many times on various mediums, but it was important to Kamp Seedorf to create a permanent image of the mayor who meant as much to the city, as the city meant to him. When a competition to create a design immortalizing Van der Laan came up, it was an easy decision for the group to enter Damsko and, of course, win.

The new version of Damsko, which was unveiled by the mayor’s widow, Femke, this past week also features words from Van der Laan’s resignation letter from September 2017: “Take good care of our city and each other.”

What’s next for a group of street artists who have undoubtedly gone mainstream? America! At the end of July Kamp Seedorf is heading to Minneapolis and Chicago to collaborate with a small 4th division (“yes we will tell them it’s FOOTball”) club.

For most of the group, which also now also has artists from Zeewolde and Holysloot, this will be their first time in the United States. There are even more changes as Bas, one of the original core members, is not as active with the collective anymore:

“Which is a shame because he was one funny guy!” Eus joked.

But that’s the way a living, breathing, growing collective works; as older members move on new members step up. In this case, the two new members – a woman, Melanie, and a young kid, Lloyd – recently joined changing the dynamics of the group which is a welcome change: “It's is really good for the inspiration and for the group spirit to let in new fresh people with crazy ideas.”

It’s the formula to keeping their not-taking-art-too-serious legacy alive. When a few members of the collective were asked “Who would you want to spend time with – dead or alive – and talk about art?” their responses were as eclectic as their work:

Mike: Utah & Ether, an American graffiti couple who can't get back to their own country because of their art.

Lloyd: Lloyd, a character from my favorite series Ninjago, to talk about the mysteries of Sensei Wu.

In the end, Kamp Seedorf is building a heritage on the things they love. “We just want to have fun and do what we like the most: painting, watching football and drinking beer.” 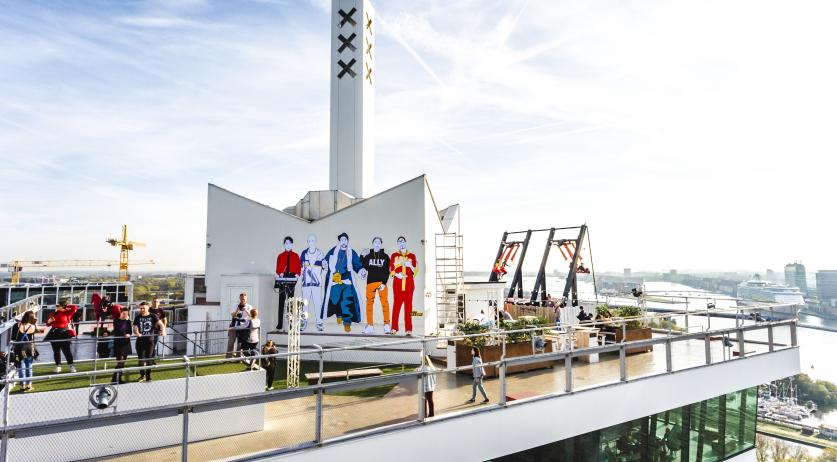