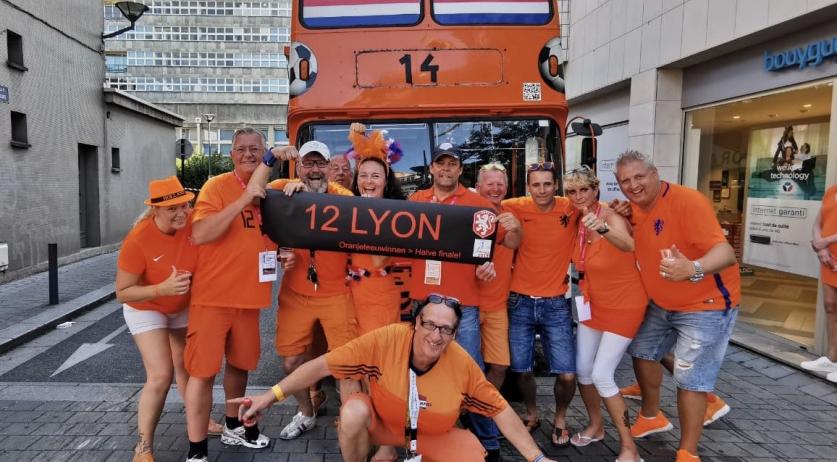 Excitement is in the air as the Dutch women’s football team gear up to face Sweden in the 2019 FIFA World Cup semi-finals match on Wednesday.

This is the first ever semi-final spot for Oranje Leeuwinnen and their second appearance in the 28-year history of the World Cup – their first being in 2015. To secure the coveted spot, Oranje dominated Italy in last Saturday’s match, emerging with a 2-0 win after only scoring in the final 20 minutes of the game.

Fans took to social media to celebrate but the even bigger celebrations and support for the team took place offline. With 2.7 million viewers, Saturday’s World Cup match against Italy was the most-viewed television program of the day. More than 22 thousand fans showed up to support the two teams at the stadium as well, even in the 34-degree heat at Stade du Hainaut in Valenciennes.

Some estimated that half of the official attendance were the Dutch team's fans.

“The team really feels the support from the fans, both in the stadium and at home watching tv,” KNVB’s Women’s Press Officer Anja van Ginhoven said to the NL Times. “This is something they never get used to; so special. It's great to see that they can inspire a next generation with their successes.”

The “next generation,” like 17-year-old Oranje fan and young footballer Myrthe who has been supporting the team’s journey for the past eight years and is enthusiastic about what comes next.

“I’m so proud of them and they’ve never come so far in the World Cup so this means a lot to them and of course to me also,” she said. “Wednesday I will be watching the game at home with some friends and family.”

Wednesday’s pre-game celebrations will see some changes, however. Dutch fans will not be allowed to walk together in their now customary ‘Orange Parade’ to the stadium for Wednesday’s 9 p.m. match. The KNVB reports the French municipality of Lyon is suggesting the parade may be unsafe.

With a distance of about 20 kilometers and expected high temperatures, fans are advised by the KNVB to bring their “walking shoes” if they do decide to take the walk to the stadium on their own.

Oranje fans will still have the opportunity to get together prior to the match. Although there will be no parade, an Orange party will take place in the center of Lyon at Place Antonin Poncet from 3 p.m.

Despite the parade ban, the excitement and anticipation have not waned. Super fans like Henk van Beek, who has been a part of the official KNVB’s Supporters Representation group for the past five years, will be taking the Oranje fans bus to the stadium; eschewing the walk altogether. He says he even plans to be the supporters’ DJ on the ride to the match.

“Everyone wants the Leeuwinnen to reach the finals now! I will be in the stadium again, so I will cheer as loud as I can,” van Beek said to NL Times.

A dedicated fan, van Beek has visited matches to support Oranje for the past 31 years and wants everyone else to do the same.

“Go to France! There are still tickets. Go see the Leeuwinnen and cheer for them the best you can, they deserve it!”

The Oranje Vrouwen take on Sweden in the semifinal on Wednesday. The match will be held at the Parc Olympique Lyonnais in Lyon, France.