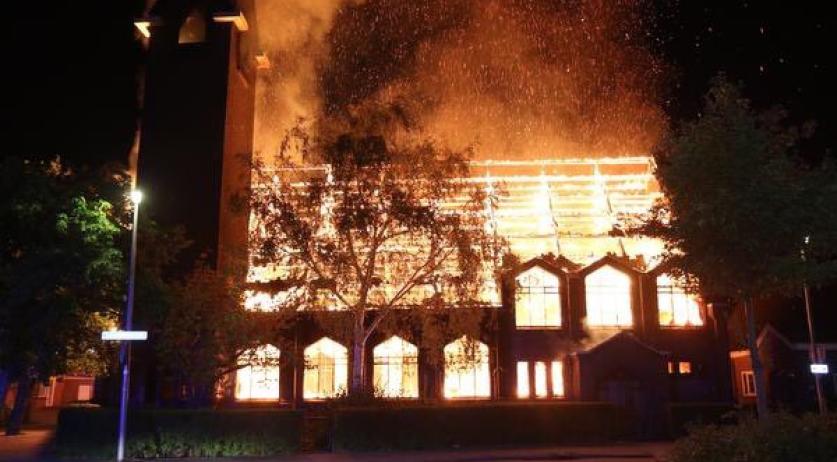 The Juliana Church on Zaandijkstraat in Rotterdam was destroyed in a large fire on Sunday night. The fire department considers the building, located in the Heijplaat neighborhood, as lost. No one was injured, NOS report.

The wooden floors and roof beams meant that the fire spread very quickly. The fire department managed to get the fire under control during the early hours of Monday morning, but firefighters could not enter the building to continue extinguishing it due to the risk of collapse. The church's tower top collapsed in the fire.

The fire department decided to demolish some of the church's walls to aid them in fighting the fire. Whether the church tower can remain standing is still being investigated.

Due to the risk of collapse, some 20 surrounding homes were evacuated. About 30 people had to spend the night in a hotel, according to ANP.

The fire and smoke could be seen in a wide area. Erasmus MC was instructed to switch off their ventilation system due to the smoke. The fire could be smelled in the city center, but according to the fire department, no dangerous particles were measured in the air, NOS reports.

The Juliana Church was built in 1930 by the Dutch reformed church, according to the broadcaster. Over the past years multiple groups of Christians gathered in the church. The building was recently sold to an owner who was planning to live there.