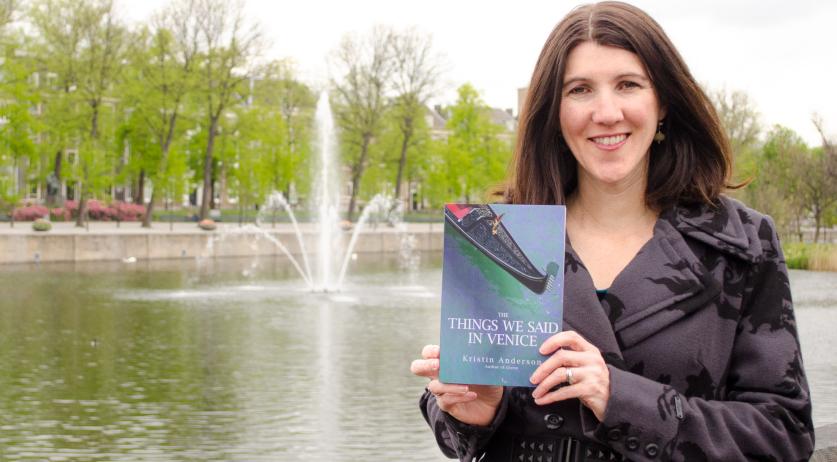 American author Kristin Anderson has been based in the Netherlands for over five years now, and has used the time to become a full-fledged novelist. Her second book, The Things We Said in Venice, is a travelogue that takes its two main characters on an on-again-off-again romance across Europe and ultimately to the Netherlands. Essentially written as a much-needed vacation to the eco-thriller she previously worked on, she based the characters on a subject of a Huffington Post article and a travel photographer/blogger.

In an interview with the NL Times, she answered questions about her book, and her work as an author. Parts of this interview were edited for clarity.

Please tell us a bit about yourself.
I am an American living in The Hague with my Dutch husband and our son. My background is in writing and marketing. Although I have been dabbling in creative writing my whole life, it is only since I moved to The Netherlands that I had the time and inspiration to write fiction. I manage a meeting room and events center by day, have a passion for the environment and love reading.

The Things We Said in Venice is equally a travel story, a love story, and a story of self-discovery. Can you give us a short synopsis of the book?
Without giving too much away, I can share the following. American Sarah Turner, who is recently divorced and on the verge of turning 37 travels alone to Europe for an extended vacation. Her goal is to experience Europe on a cultural level while honoring the memory of her mother. She also wants to process her divorce and get to know herself again before she enters a program in Amsterdam that could potentially change her life.

American vlogger Alexi visits Europe’s cathedrals and shares her insights with her growing online following. As she takes us to Barcelona, Reims, Vicenza and other wonderful cities, her stories seem to intertwine with those of Sarah.

Renowned travel writer Fokke van der Veld is on a trip in Italy with three old classmates before they attend a 20-year fraternity reunion in Amsterdam. Fokke is undergoing what could be likened to a midlife crisis and his friends are both supportive and ruthless. Even though he appears to have a great life, he has also experienced a serious break up and betrayal. He longs for a more meaningful existence both in his personal life and his career, but fear holds him back.

A chance encounter in Italy brings Fokke and Sarah together and a sometimes comedic, sometimes heart-wrenching tale of love, travel and self-discovery unfolds. Where they travel, what they learn along the way and whether or not they end up together, are the elements that compel us forward.

What do you have in common with the characters?
I am an American, and before I moved to The Netherlands, I had limited travel experience outside the U.S. I’m from California, but I lived in Bend, Oregon for a few years. Sarah is from Bend. Like Sarah, I too fell for a Dutch man and I tend to have a difficult time with understanding foreign languages (although I believe my pronunciation to be better than hers!) I am also enchanted with travel, culture, architecture and cathedrals and view my time in Europe as a Godsend.

Authors and the characters they create have a strange relationship. You might think that the author is always in control, but as characters evolve, they develop a life of their own and inform you of their preferences, hopes and desires. For example, Sarah evolved into a vegan, which meant I had to go back and rewrite parts of the book to accommodate her. I have tried to become a vegan, but I’m not there yet. Perhaps my character wanted to show me the path!

One of your book dedications is to an author named Francis Guenette who helped you get over writer’s block. Tell us a bit about that story.
In January 2015, I was experiencing writer’s block on the eco-thriller manuscript. I wanted to write a short story on a completely unrelated topic as a way of clearing my writer’s palette so I could have a fresh start. I asked readers of my author blog to give me three words and a genre as fodder for a short story. Fellow author Francis Guenette gave me the following words: "A suitcase, a stranger and a train. Love story." That was all I needed to get going. Ended up the characters weren’t satisfied being caught in a short story, and the full-length novel might not have come about had Francis not responded to my post.

Where and how can people buy the book?
People can get a signed copy this Saturday, May 20th at the American Book Center in The Hague, Lange Poten 23. I will be reading from my book, signing copies and having a free raffle for a copy of my first novel, Green. People can then order a paperback through the American Book Center in The Hague and Amsterdam, or order a Kindle or print version on Amazon. For those living in The Netherlands, shipping is cheapest through Amazon Germany.

What plans do you have in store for a third novel?
I am working on three different concepts. One is a sequel to The Things We Said in Venice, that would introduce new main characters, but circle back around to the existing characters. I am also working on a novel about a female marine biologist inspired both by my passion for the environment and my time in The Netherlands—which is after all, the land of water expertise.

What is your life in the Netherlands like?
I have a good, but simple life in The Netherlands. I speak both English and Dutch, which lowers many barriers. Outside of work, I spend a lot of time with my husband and son and our friends, visit museums, exercise, read and write, go to church and attend events that are connected to making a more sustainable world. I've participated in the 100-100-100 trash free challenge in The Hague organized through Duurzaam Den Haag, co-organized a Hague--based International Earth Day Festival two years in a row and am active in different work groups related to sustainability. We do travel, but not nearly enough!

What do you like and what do you dislike about living here?
First the bad: Dutch directness gets on my nerves. I don't like the weather (surprise!) and I don't like the population density of The Netherlands. Now the good: I like the lateral management system, rather than the hierarchical approach. I appreciate socialized medicine, that our high taxes mean that the government provides for all of its citizens and the sense of equality I feel in my life. I love multiculturalism and that I have friends from diverse backgrounds. I still find it fascinating that I can walk down the street and hear 10 different languages on any given day.