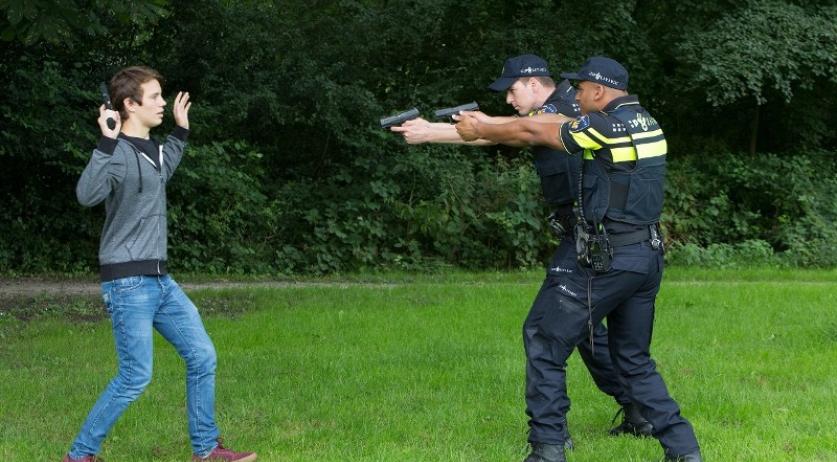 The Dutch police launched a campaign aimed at kids between the ages of 10 and 16 years, warning them of the dangers of walking the streets with toy guns. According to the police, officers can't always immediately tell whether a gun is fake and this could lead to the child being injured or even killed. Every week the police get between 20 and 30 reports about young people walking around with firearms. Afterwards it is often determined that the guns are fake, but look real enough that closer inspection is necessary. But for the safety of bystanders and officers themselves, the police always have to approach the teenager involved as if he is armed and dangerous. This means with guns drawn. Such an arrest can be traumatizing for all involved, and may even be dangerous. As an example the police site the arrest of six boys in Rotterdam last month. A passerby reported the boys walking around with a handgun. Officers approached the group, all boys between the ages of 13 and 18 years old, carefully with guns drawn. When the boy with the gun refused to follow police instructions, a warning shot was fired. Only afterwards could the officers determine that the gun was a fake. "I think he wanted to act tough in front of his friends. But that could have gone horribly wrong", one of the involved officers said afterwards. "What if the boy took the gun out of the bag. What would I have done, or a colleague? Would we have shot at him? We're talking about children here. Boys that later turned out to be between 13 and 18 years old. Fortunately it ended well." End July the Tilburg police forced a car containing a woman and three kids off the road after a passerby reported a gun in the vehicles. The woman and children had to get out of the car with their hands up, and with police officers pointing their guns at them. Here too the gun was a toy. Carrying toy or fake guns in public is illegal in the Netherlands, as the weapons seem to be threatening and may be mistaken for real firearms. Especially in this time of terrorism threats. The police therefore launched a national campaign against fake guns on the streets. Schools will receive flyers and posters to put up and spread among students and teachers were asked to discuss the topic in class. The police also encourage young people to discuss this with police officers online on Vraaghetpolitie.nl on August 31st between 7:00 p.m. and 9:00 p.m.