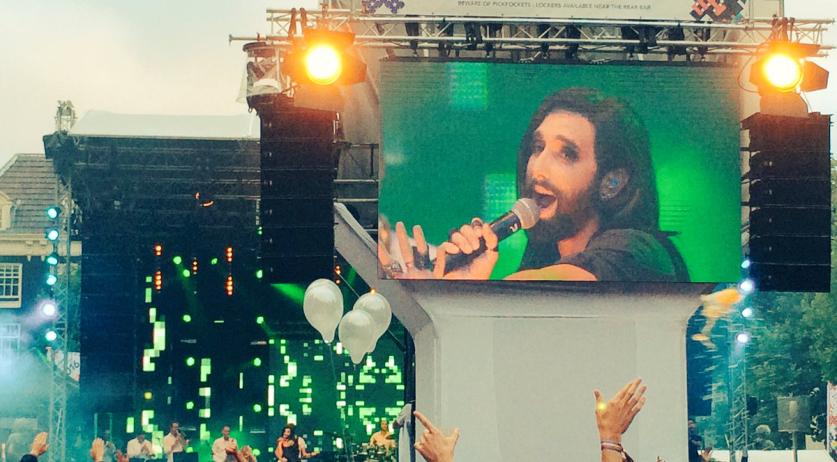 The closing party for EuroPride 2016 in Amsterdam on Sunday night attracted around 500 thousand visitors, according to the Amsterdam police. By 8:00 p.m. the police had to start showing people away as the Rembrandtplein reached its capacity, the Gelderlander reports. The party ended at 10:00 p.m. after performances by, among others, Karin Bloemen, Kate Ryen and Conchita Wurst. Several prizes were handed out for the Canal Parade on Saturdy. The World Religion Boat won first place in the category Join our Freedom. The boat was described as a "cheerful interfaith gathering" and included followers of the religions Islam, Judaism, Buddhism, Hinduism and Christianity. For the first time ever, a gay imam was also on the boat. The police boat came in second place and gay interest group COC came in third. The prize for most beautifully decorated boat went to Legally Gay. Royal Flora and Plastic Soup came in second and third. Prize for the best statement went to St Ocan, followed by Zahoor and Trans United. On Sunday Gay Pride director Lucien Spee stated that Amsterdam took back the title of Gay Capital of the world this year. "We were of course a little busy, but the crowds almost equaled that of last year", he said. 2015 was a record year for Gay Pride visitor numbers.

Goodbye from Backstage! This #EuroPride was Epic! Thank You all so much! We'll meet again! Big Kiss and Love ON! pic.twitter.com/zkpZv8h4OV