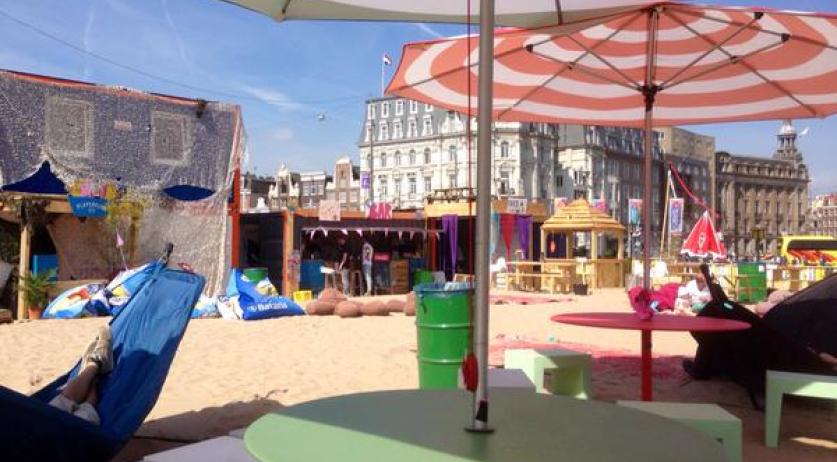 Today may well be the sixth tropical day in the Netherlands this summer, if afternoon temperatures in De Bilt reach 30 degrees. The Royal Netherlands Meteorological Institute expects sunny skies and warm temperatures of between 25 and 31 degrees all through in the Netherlands. The nice weather has enabled Amsterdam residents to take full advantage of the PlaygroundCS beach, near Amsterdam Central Station. Weather was nice enough to bring out at least a dozen people to the MeetBerlage pop-up office set up on the beach there, says Simina Jonker, an organizer of the free work space. Freelancers, entrepreneurs and even NL Times editors have stopped by all week to use the facility and take part in workshops and masterclasses there. "The MeetBerlage pop-up at PlaygroundCS is the best of both worlds for playful entrepreneurs," Jonker says. But as is always the case, the sunny skies are too good to last forever. According to the KNMI, the chance of rain and thundershowers will increase from tonight. The showers will move from the southwest northwards across the country during the night. Friday and Saturday are expected to be cloudy with a chance of thundershowers. Afternoon temperatures are expected to be around 25 degrees tomorrow and between 19 and 21 degrees on Saturday. A code yellow weather warning for storms possibly accompanied by hail and heavy winds has been issued for Thursday night and Friday. The Netherlands has had an above average number of tropical days this summer. There are usually an average of 4 tropical days a year. Arcen and Limburg may even have its 13th tropical day today, compared to an average of six, according to the AD.