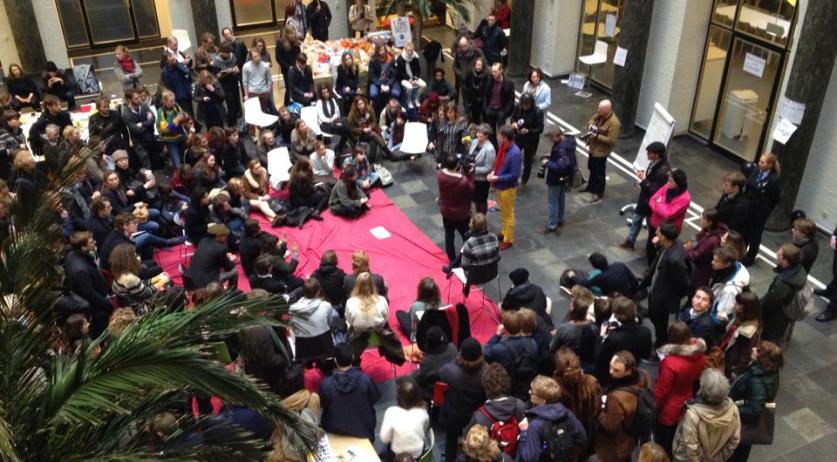 The protests at the University of Amsterdam (UvA) has been going on for exactly a month today. Here follows a brief summary of what has happened so far. On February 13th a group of UvA students occupied the university's humanities building the Bungehuis. The students called themselves De Nieuwe Universiteit (The New University) and demanded more participation and democracy in the university. Four days later, on Tuesday February 17th, the heating and internet in the Bungehuis were disconnected in an attempt to get the students out. When this failed, the Executive Board of the university turned to court and the judge ruled that the occupiers had to vacate the building immediately and face a 1,000 euro penalty for each day they don't. But still the students refused to leave. Mayor Eberhard van der Laan eventually got representatives of De Nieuwe Universiteit and the Executive Board together to discuss the matter, hoping that a solution will be found. This also failed. The police eventually went in and evacuated the building 11 days after the occupation began. More than 45 students were arrested. The next day, February 25th, about 300 students occupied the Maagdenhuis after a peaceful protest march. The students declared Wednesday March 4th a national protest day and students and universities all across the country spent the day discussing their problems. Minister Jet Bussemaker (Education) visited the students and commented that they have a point and seem genuinely concerned. She advised universities to listen to their students' complaints. A group of University of Amsterdam lecturers, calling themselves Rethink UvA, joined the protest and gave the Executive Board their demands and an ultimatum that more actions will follow if the demands are not met. The lecturers have three demands: the Executive Board must make the university more democratic, restore trust and conduct an independent investigation into the financial situation. Earlier this week the executive board gave the protesters a 10 point proposal with which they hope to meet these demands.