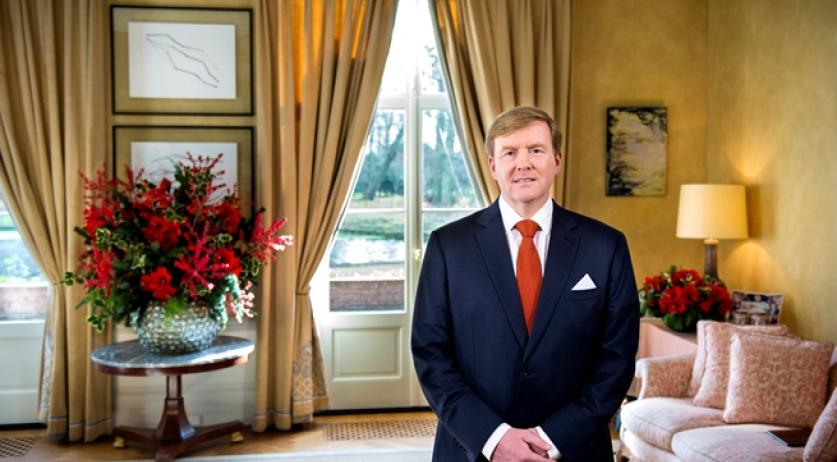 King speaks of MH17, tolerance and selflessness in annual address

King Willem-Alexander started his Christmas speech, which was broadcast today from Eikenhorst in Wassenaar, by talking about the grief caused by the disaster with flight MH17. He also emphasized the importance of freedom, tolerance and shared responsibility. "The sorrow for relatives and friends who died in the plane crash on 17 July, overshadows this Christmas for thousands of people in our country and beyond. For them and all those affected by grief, this is not a day of light but of emptiness. No day of warmth and good living, but one of lacking." the king said regarding flight MH17. The king said that no matter how independent we are in life, we still rely on others. Which is why the events of the past year worry many people. "Developments elsewhere have an impact on our lives. At the borders of Europe fierce showdowns are taking place." he said. "Because of the violence millions of people are searching for a safe haven." He also noted that as the world affects us, our actions also affect the lives of far away people. "We are part of a complex world, whether we like it or not." While feelings of anxiety and intense experience of beliefs are understandable, they are not a license for any sort of behavior. "Whoever threatens another person, that person deprives the other of his sense of security, his feeling of being home." The king asked whether we can live today in the luxury of freedom. He answered "yes". "If we continue to realize that our freedom is our common responsibility. And that people can only truly be free if they are allowed to be themselves in a society that accepts that people differ." He reemphasized the importance of tolerance and working together. "Unity without diversity is suffocating. Diversity without unity is loose sand. The Netherlands is more than seventeen million selfies. We need each other, more strongly than we often realize ourselves. Everyone's abilities and skills are valuable and important." "I wish all of you - wherever you are and whatever your personal circumstances - a blessed Christmas."