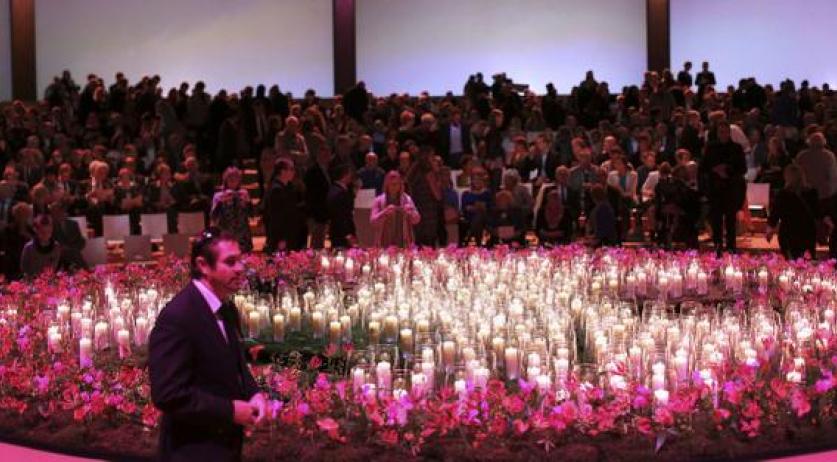 The national memorial for flight MH17 has concluded. More than 1,600 relatives of victims of the MH17 plane crash came together in the RAI, Amsterdam. On entering, attendees put a flower in a wall on which the names of the victims were projected. 298 candles surrounded by flowers stood in the middle of the hall. One for each victim. Prime Minister Mark Rutte spoke first and stated: "There is only the reality of 298 deaths. A carefree goodbye, became an abrupt farewell." After the Prime Minister's speech children added more flowers to the center of the hall while Marco Borsato sang "Voor altijd". Besides relatives other people were also present, including King Willem-Alexander, Queen Maxima and Princess Beatrix. Three relatives gave speeches and a fourth read a poem. Anton Kotte said this about his son, daughter in law and grandson, which he lost to the disaster: "We feel amputated," he said. "It looks like we are all in the same train. We do not know each other, but we are fellow sufferers." He expressed his appreciation for the reception of the victims in the Netherlands. "The affiliation gives us strength to go on." A second relative, Paul Markebach, read the emotional poem "Waarom?" (Why?). Then the 13 year old Gita Wiegel spoke. "She was a beautiful person, loving, friendly, caring, my friend, my example. In short, my everything. Every day you are haunted by the fact that your loved one is gone. I wanted to do so many wonderful things with my mother." Gita remembers the last message from her mother: "Until four weeks from now baby, take care of yourself." Gita said she is broken inside, but is going on with her life for her mother. At the end of the ceremony a fourth relative spoke. Suze Ann Bakker lost both her parents, who would have celebrated their birthdays next week. "Next week we will come together for their birthdays. They would have liked that." She also expressed her gratitude for the support offered by the Dutch people. Then relatives called the names of the 298 victims, which includes 196 Dutch people, followed by the Last Post and a minute of silence. Flight MH17 was shot down in the east of Ukraine on July 17th.