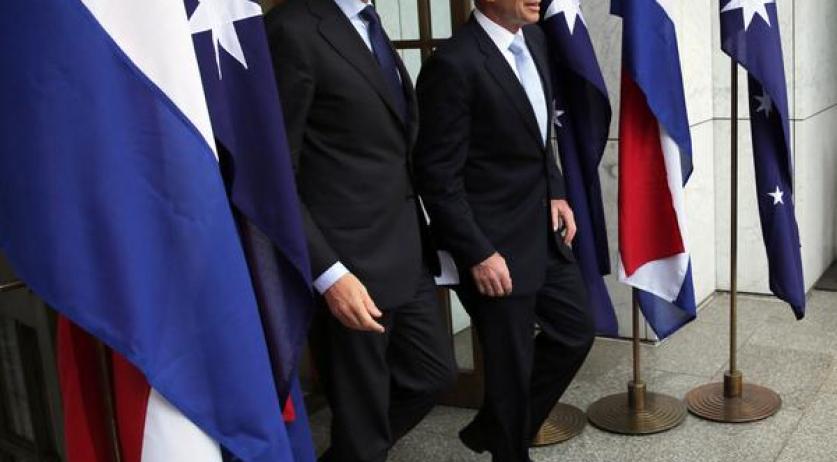 Today Prime Minister Mark Rutte and Australian Prime Minister Tony Abbott met in Canberra, Australia to discuss flight MH17. Both Prime Ministers believe that those responsible for shooting down flight MH17 will ultimately be punished. " I can guarantee you that we will do everything we can to bring those responsible to justice. We are working on this with all the countries involved through the independent Dutch Safety Board, through the public prosecutors, many people of high calibre are working on this on both sides of the world to get to the bottom of this. So, we are highly motivated. I have no 100 per cent guarantee but I do have 100 per cent guarantee that we will do everything we can to bring them to justice." Prime Minister Rutte said during a joint press conference in Canberra today. The disaster with flight MH17 strongly affected both the Netherlands and Australia. Among the 298 victims of the disaster were 196 Dutch and 38 Australians. Prime Minister Abbott has always been certain about the involvement of the pro-Russian separatists and thus far he has had no reason to doubt that certainty. "We were given very strong security advice in the days following the atrocity as to the type of weapon, as to the place from where the weapon was fired and as to the likely prominence of the weapon and there's been nothing since then to question that original security advice." Prime Minister Abbott is determined to personally talk with Russian President Vladimir Putin over the next week or so to inform him that Australia too expects full Russian cooperation with the investigation into the Disaster. Abbott will see Putin in Beijing at the APEC conference and Putin is also expected to attend the G20 conference in Brisbane. In October Prime Minister spoke to Putin during the high level Asia-Europe (ASEM) summit in Milan and demanded Russia's cooperation. Abbott and Rutte emphasized that the Netherlands and Australia are working closely together in the investigation into what happened with flight MH17, and that the tragedy has brought them close together. "Mark and I have become very good friends over the last 12 months. Our friendship has been forged in some difficult circumstances, but it's become close and deep through the work we did together on MH17 and I suspect we will be working together in the future, not just on that, but on some national and international security issues as well." said Prime Minister Abbott. The Prime Ministers describe their two countries as physically being thousands of miles apart, but emotionally and spiritually being next door neighbors. "I think that is a very good description of the strength of the relationship between Australia and the Netherlands." said Abbott. Yesterday Prime Minister Rutte visited Malaysia to discuss MH17 with Malaysian Prime Minister Najib Razak.