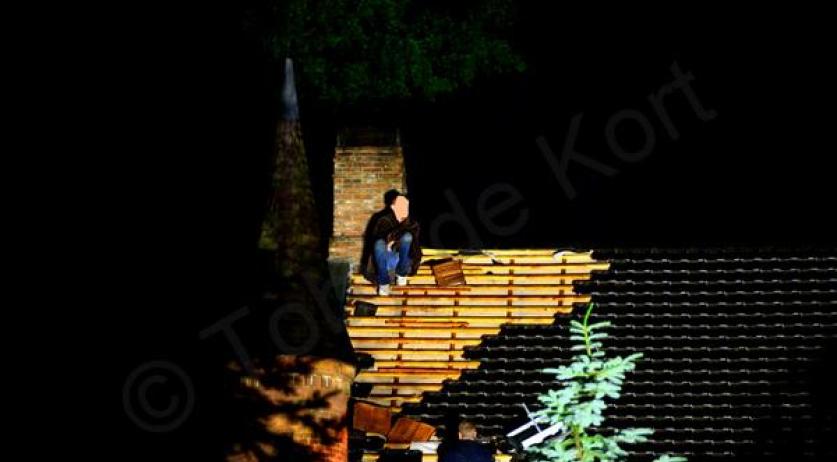 A suspicious man reportedly caught trying to break into a Hilvarenbeek hunting lodge kept police at bay all night by throwing roof tiles at the responding officers. The incident began around 8 p.m. Sunday night, and finally ended 17 hours later when the man quietly surrendered. The hunting lodge's resident couple were watching television when they say they heard voices, according to Omroep Brabant. Through the kitchen window they could see a man sitting in the gazebo. The man shouted something in English. The woman of the house thought it was "Don't call the police." The woman immediately phoned the police and the park ranger. When the ranger arrived at the scene he tried to apprehend the intruder, but the man fled through the bedroom window onto the roof where he spent the night throwing roof tiles at the police. The police did not dare approach the intruder in case he slipped and fell, as it had rained throughout the weekend. "It was a surreal situation," says the woman of the house. The emergency services were called in, putting several police cars as well as a fire engine with a ladder at their disposal.  Local mayor Ryan Palmen was also present at the scene. Responding officers tried to negotiate with the intruder in English, though his nationality is still uncertain.  He was provided with a blanket and some water, as hypothermia was a major concern. The intruder was apprehended on Monday just before noon. The couple has been living in the hunting lodge for 29 years and thought that they had seen everything the woods had to offer.  What happened Sunday night surpassed it all, they told the broadcaster. The hunting lodge in question, also known as Het Kasteel, or The Castle, is owned by Goirle-based textile manufacturer Van Puijenbroek.  The estate is located on the border area between Goirle, Hivarenbeek and Poppel. The roof of the estate was said to have been extensively damaged.