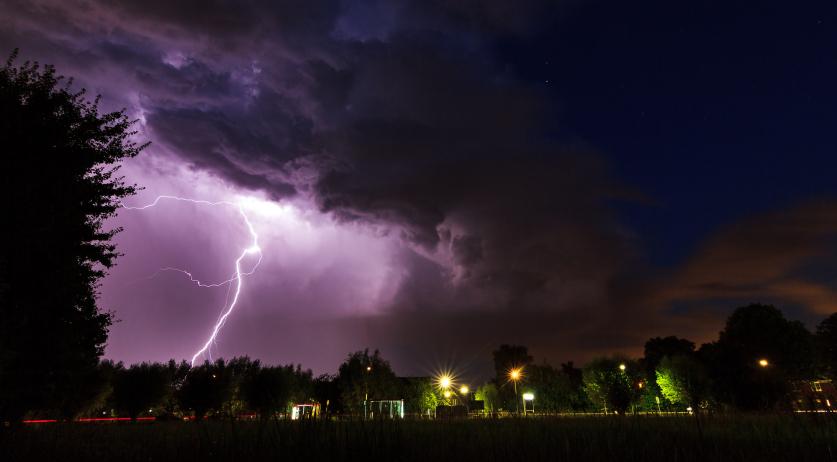 Beautiful big flash of lightning in the night sky over Baambrugge in the Netherlands - Source: dennisvdwater at DepositPhotos - License: Deposit Photos
Tech
Nature
Scheveningen
The Hague
lightning
KNMI
Share this:

A loud bang that could be heard originating near Scheveningen around 4 p.m. on Saturday was the result of "the most dangerous type of lightning in the world", weather website Buienradar said. Analysis showed that the lightning strike had an extremely high electric current of 267,000 amps.

The lighting strike occurred a few hundred meters west of the southern pier at Scheveningen Beach. This particular form of lightning can reach a maximum of 300,000 amps, and is ten times more powerful than normal lightning strikes. In comparison, household current is usually 15 amps.

What makes these discharges recognizable is the huge bang they are accompanied with, which was likely to have been heard everywhere in The Hague and its surroundings. "If it hits really close, it can feel like a bomb has just exploded," Buienradar said.

"Yep. That's what I heard yesterday evening. A series of loud bangs and menacing rumbles that went on and on and on, uncomfortably close to where I live," one Twitter user said.

About 5 to 10 percent of lightnings are "positive lightning," which is the most dangerous kind. These do not strike under the thunderstorm, but rather next to it. In that case, the distance that lightning has to travel through the air is many times greater, requiring much more energy.

Exactly that occurred in Scheveningen on Saturday, according to Buienradar. "The real storm was still hanging over the land, but the lightning struck far from the storm above the sea," they said.

Dutch meteorological institute KNMI has also issued a code yellow warning due to thunderstorms on Sunday. The warning applies to North Brabant, Zeeland, South Holland and Limburg between 4 p.m. and 11 p.m.

"Avoid open water and open areas and do not hide under trees. Follow weather reports and warnings," KNMI stated.

please i was in a store at the time it happened i thought something fell😭😭 can’t believe i heard it all the way from there. big ass lightning strike my gawdhttps://t.co/MDaNmhjTyr