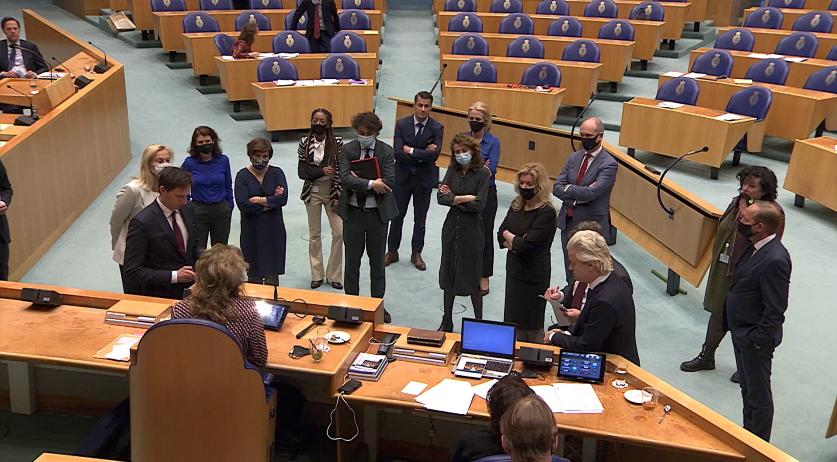 Mark Rutte looks on in the background as party leaders in the Tweede Kamer discuss how voting will proceed on a set of motions. 30 April 2021 - Source: Tweede Kamer at Tweede Kamer - License: All Rights Reserved
Politics
Mark Rutte
Pieter Omtzigt
Share this:

Caretaker Prime Minister and VVD leader Mark Rutte admitted that he "really made a big mistake" by saying he had not been outspoken about Pieter Omtzigt. The popular CDA MP was highly critical of how the Cabinet handled the childcare benefits profiling scandal, and Rutte denying he spoke about Omtzigt during early Cabinet formation talks after the March election kicked off another large political scandal.

During Nieuwsuur, Rutte said he reached out to Omtzigt to discuss "his anger" over the situation, and to try to put the issue to rest. He also again repeated his initial comment that he simply did not remember discussing Omtzigt during formation talks, and that he had not lied. "I don't lie, I try not to cover things up or take things off the table," Rutte said.

In April, Rutte narrowly escaped a no-confidence vote, but was censured by the Tweede Kamer for not being straight forward with Parliamentarians. This was because of meeting minutes that had Omtzigt's name written next to the words "function elsewhere". Rutte said on camera that he did not discuss Omtzigt with the formation pathfinders, but notes from that conversation showed that he did indeed.

Rutte responded to the censure by saying he would "work terribly hard" to regain trust from his political colleagues. He then knocked down a second censure vote which was called when it became clear that critical members of parliament were a more common topic of conversation during weekly meetings of ministers.

Omtzight confirmed on Twitter that he has indeed been approached by the prime minister. "Mark Rutte indicated to me by text yesterday that he would like a meeting with me, preferably next Friday. I answered that I am always willing to have a conversation, but that at the moment it is not possible to have these kinds of conversations," he wrote.

Omtzigt, who is currently dealing with health problems tied to working too many hours said he was hoping to be able to return to work sooner, but revealed his recovery process was going slower than expected.

In the March elections, over 300 thousand CDA voters selected Omtzigt as the MP they want to see in office. That made him second in the party only to party leader Wopke Hoekstra, the caretaker finance minister.

Rutte acknowledged during the interview that he made mistakes that led to the political crisis but pointed out he will not "suddenly do all kinds of things differently" should he become prime minister again. "I led the campaign. And we are by far the biggest party. I received two million preferential votes."

He pledged to remain as leader of the VVD despite calls from rival parties who say they will not work with the VVD in a coalition government before his resignation. "It would be very odd for me to say I was resigning," he said, in reference to his popularity with voters.