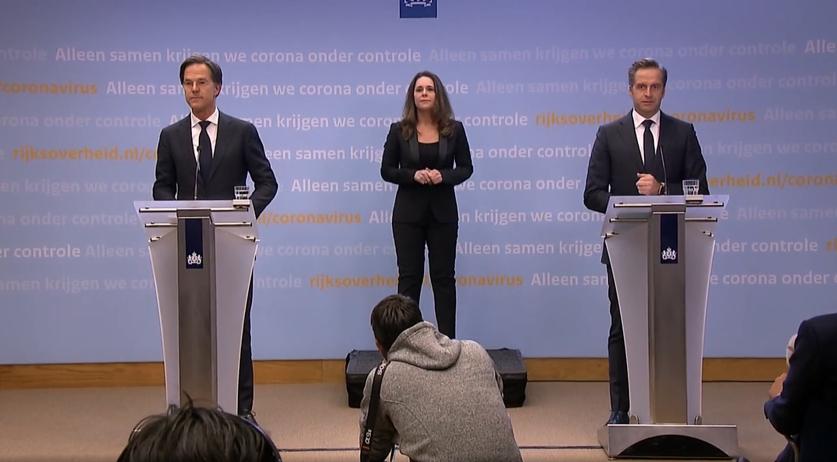 Dutch Prime Minister Mark Rutte announced plans to impose a curfew on the Netherlands from 8:30 p.m. through 4:30 a.m. starting on Friday. The new restrictions proposed on Wednesday also include making those who fly to the Netherlands take a rapid antigen test to further determine if they are infected with the SARS-CoV-2 coronavirus, a ban on all flights and ferries from the United Kingdom, passenger flights from South Africa, Suriname and parts of South America, and a maximum of one guest aged 13 or older allowed in a household per day.

"We are getting out from under this, but first we have to brace ourselves again, now that more contagious variants are coming our way," Rutte said during a press conference with outgoing Health Minister Hugo de Jonge. He was referring to coronavirus mutations like those which have caused surging numbers of infections in the United Kingdom and South Africa.  "The experts are warning of a third wave, and we must take that seriously."

Rutte continued, "The OMT's advice is clear. Do the maximum now, so that we will be ready for what is yet to come."

The outgoing Cabinet will debate the curfew restrictions in Parliament on Thursday. Moments before the press conference, it was not clear if Rutte had support from a majority of MPs to get the curfew approved. With the curfew being a controversial issue, the exiting prime minister opted to try and win over parliamentarians instead of initially attempting to force the curfew through.

Only the curfew has to be approved by Parliament, which Rutte said the exiting Cabinet supported unanimously. The other restrictions announced by the government will quickly take effect. The next update will likely happen on February 2, when issues about relaxing rules for some sectors will be discussed.

De Jonge said "It is already clear" that primary schools must open back up on February 8. He then backtracked and said that it depended on the outcome of research into the B117 mutation of the coronavirus, the variant prevalent to the United Kingdom.

If approved, the curfew will be implemented within a few days, and the government said in a statement that it would last at least until 4:30 a.m on February 10. Curfew violations will be fined at 95 euros plus any administrative costs.

"With the curfew, the Cabinet wants to prevent visitors and encounters in groups and thus slow down infections," the government said in a statement.

There were just a handful of exceptions to the curfew, the government said, such as for disaster response, medical emergencies involving people and pets, or for responding to a summons or to be present to give a statement when requested by the authorities.

A worker may go outside if required to do so for their employment, including all delivery workers. They must be able to prove they are on the job with a written statement from the company; simply wearing a food delivery driver uniform will not be enough. The exception also covers people invited to be a guest on an evening program being broadcast live. It also includes informal care givers known as mantelzorgers when they are performing their tasks.

Passengers starting or completing an international trip will also be exempted. Participation in a funeral will also be allowed provided the participant can prove they are taking part in the event. Students will also be permitted to sit for an exam if it has already been scheduled.

Further, one person will be allowed to walk their dog on a leash at a time. However, Rutte asked that people not try to skirt the rules by arranging for a "loaner dog" if Parliament approves the curfew.

"If you're going to pass around your dog among the whole family so everyone can go out late into the night, that's just really stupid."

Strict travel restrictions to prevent people from arriving in the Netherlands

Travel restrictions to the Netherlands will go into force beginning on Saturday at 12:01 a.m., according to a draft statement from the Cabinet posted at 2:05 p.m. on Wednesday which was quickly taken offline. Aside from the United Kingdom and South Africa, the flight ban also includes passenger aircraft originating in Argentina, Bolivia, Brazil, Cape Verde, Chile, Colombia, Ecuador, French Guyana, Guyana, Panama, Paraguay, Peru, Suriname, Uruguay, and Venezuela. When the statement was posted back online, Cape Verde was removed from the list.

The Dutch government is also further limiting who will be allowed to enter the country from outside the European Union, listing diplomats, long-distance romantic partners, journalists, medical personnel and top athletes as those allowed to cross the border.

Anyone flying to the Netherlands from an area designated by the government as being at high-risk for coronavirus infections will be required to take a rapid antigen test within four hours of their departure to the Netherlands. The rule will first apply to anyone traveling by aircraft or ship, and could possibly be extended to bus and train passengers. The negative antigen test must be presented in addition to the negative PCR test taken no more than 72 hours before arrival, and also is also required of those flying from the Dutch Caribbean territories to the Netherlands.

"Because rapid tests are not available everywhere near ports and airports, the double test obligation is expected to reduce the number of journeys to our country," the Cabinet said in a statement.

All passengers arriving in the Netherlands will be told to quarantine for ten days. They will be allowed to schedule another PCR test after five days of quarantine, with a negative result allowing them to leave isolation.

The Prime Minister announced that the maximum number of household guests allowed per day will be cut in half. Only one person aged 13 or older will be allowed as a guest in a home, but there will still not be a limit on the number of younger children permitted as a guest.

The government warned of the increasing likelihood that the mental health of some people will deteriorate, and it again asked that family, friends, neighbors and colleagues look out for each other's well being. "Stay in touch with others by phone or video call," the government stated. "But meeting fewer people is of course difficult for everyone. Therefore, pay extra attention to people around you, especially people who are ill, lonely or have psychological complaints."

Additionally, based on advice from the outbreak management team, the caretaker Cabinet will only permit a maximum of 50 people present at a funeral. That rule will take effect at the start of Monday.

Rutte said he wanted everyone in the country to strictly stick to the advice from the Dutch government as well as the restrictions which will be enforced. "Therefore, I am appealing to the Netherlands to really say, 'Let's all stick to the measures together. You can see positive results in all European countries where there is already such a curfew."