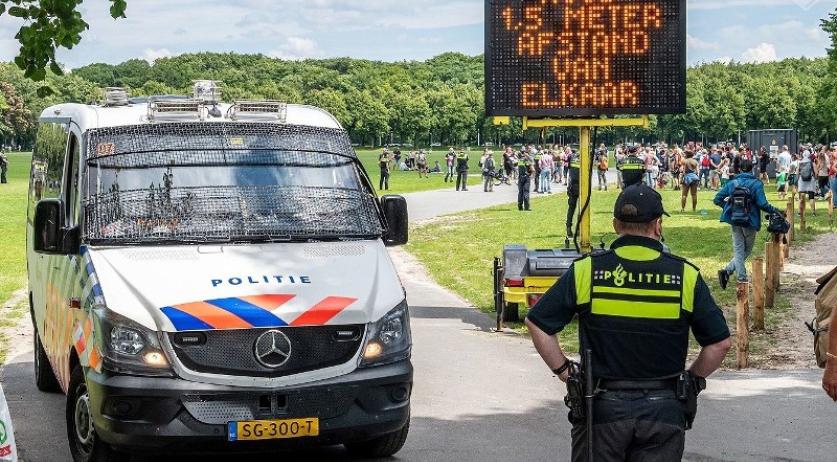 The 'upper layer' of anti-lockdown protests in the Netherlands consists of a broad and varied range of activists, but there is also a "radical undercurrent with sometimes extremist behavior," the national coordinator for counter-terrorism and security NCTV said in its quarterly threat assessment. The same kind of undercurrent is also present at some farmers' protests, the NCTV said, NU.nl and NOS report.

Since the outbreak of the coronavirus epidemic, people in the Netherlands have gathered online and offline to speak out against government policy. This rejection is not much based on "ideological motives", but on feelings of "unfairness, great unease or a different perception of reality," the NCTV said.

"People who have long mistrusted the government, science and traditional media can see ideas corroborated in conspiracy theories and misinformation," the NCTV said. And this has contributed to the "radical undercurrent" that sometimes display "extremist behaviors" such as "harassing journalists and politicians or intimidating police officers".

The NCTV also noticed that conspiracy theories are reaching the mainstream much more quickly since the outbreak of the coronavirus. "An online context has emerged within which the threshold to engage in extremist behavior is lowered. This context reinforces polarization and in some cases leads to hardening, intimidation or (incitement to) violence."

The counter-terrorism coordinator also said that the ongoing farmers' protests are becoming "smaller and grimmer". Some farmers are showing "a certain hardening", for example by "making threats towards politicians, journalists and fellow farmers who think differently."

Various groups of citizens are seeking connection with these ongoing protests. "Affiliation with different groups with different grievances, connected by anti-government thinking, can lead to hardening," the NCTV said.

"Unlike in other countries", the anti-racism protests in the Netherlands happened peacefully, the NCTV said. However, the debate about racism has "sharp edges" on various sides, with some individuals and small groups showing signs of hardening. "This is reflected, for example, in the exclusion of dissenters from debate and vandalizing statutes," the coordinator said, "but also intimidation and open and covert threats to opponents and the police".

The NCTV signaled an increase in people who, partly fueled by extreme right-wing ideas, threaten violence online. There are many small right-wing extremist groups in the Netherlands. They are still very fragmented and lack appealing leaders and are usually not violent. But the NCTV is concerned about the large amount of right-wing extremism online.

The new generation of right-wing extremists meet and talk online and in communication apps. According to the NCTV, this generation will not easily join what the consider old-fashioned groups. They share their ideas through channels like Telegram, Discord and Instagram, and therein lies the danger, the NCTV said. They can more easily stay under the radar and are harder to track down than if they had joined an organization in the old-fashioned way.

According to the NCTV, the main terrorism threat to the Netherlands still comes from jihadism, though the immediate threat seems to have diminished somewhat this year and now mainly comes from loners instead of jihadist groups.

The Netherlands' threat level is currently at 3 out of 5, which means that a terrorist attack in the Netherlands is "conceivable", but there are no indications of one being planned.