The remain of a Spanish fort established during the Eighty Years’ War were uncovered by archaeologists in Leiden. The Lammenschans fort is part of a well known local legend that when Spanish troops fled at the end of the Siege of Leiden they left behind a pot still filled with a stew that may have been the origin for hutspot, a Dutch dish now made from boiled and mashed potatoes, carrots and onions.

Legend has it that Dutch orphan Cornelis Joppenszoon found the stew, then made with parsnips and carrots, and the abandoned fort on 3 October 1574. Some 446 years later, pieces of pewter forks or spoons, drinking cups, pottery, fishing line and a bead were found at the site, along with portions of the moat dug out to protect the location.

Joppenszoon grabbed the stew and hiked a kilometer north to the Leiden city walls. The Watergeuzen, a collection of beggars and pirates who helped fight off the Spanish, arrived in the city with white bread and herring.

A tradition was born, and the city has celebrated its liberation under the banner “Leiden is no longer in trouble” ever since, where hutspot, white bread and herring are served annually on 3 October.

“De Lammenschans is found. Just in the month that we celebrate that ‘Leiden is no longer in trouble’, our archaeologists find the remains of what sometimes seemed like a legend,” said Willy de Zoete, the Deputy for Culture and Heritage for the Province of Zuid-Holland.

“Our Zuid-Holland land represents a special remnant of our connection to our history.”

The exact location of the site was completely unknown with few attempts made to find it until 2017 when a crowdfunding campaign was launched. This was tied in with the RijnlandRoute infrastructure project, which made it possible to excavate at and below the Europaweg.

The items found at the site were dated to the 16th and 17th centuries, according to a statement from the province. Several other bags of soil were also collected at the location, and will be analyzed in the coming months. 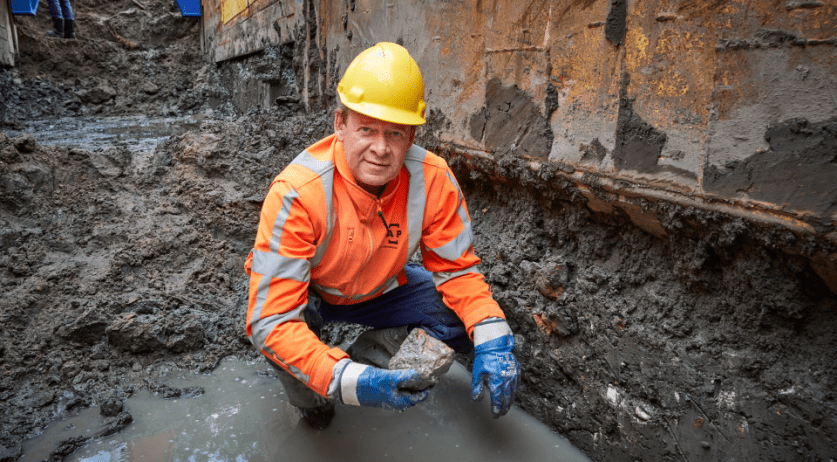 Archaeologist Ivar Schute with a discovery at the Lammenschans, a 16th-century Spanish fort Used during the Siege of Leiden, and re-discovered in October 2020 Vincent Basler Provincie Zuid-Holland (Supplied) All Rights Reserved