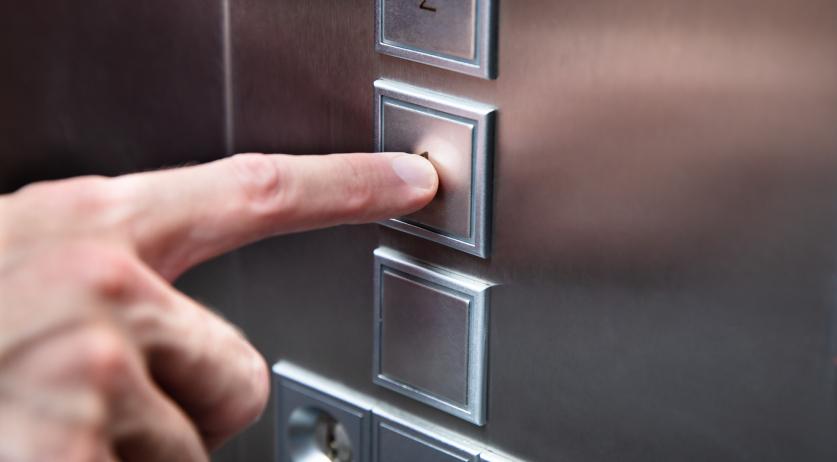 Aerosols can linger up to 20 minutes in an elevator if it's in normal use, according to a study by the University of Amsterdam in collaboration with Amsterdam UMC. The researchers advise people not to talk or cough in an elevator, and maybe wear a mask.

Aerosols are tiny respiratory particles released when people breathe, talk, cough, sneeze etc. They are increasingly seen as a potentially important way of coronavirus transmission. "Coronavirus-infected saliva from hospital patients who have a relatively mild form of corona can carry between 10,000 and one billion copies of RNA per 1 milliliter of sputum," the researchers said.

The Amsterdam researchers mimicked a series of single coughs using a specially designed nozzle in a number of hospital elevators, and then used lasers to illuminate the aerosols so that they could track how quickly they dissipated. They found that with normal use, in which elevator doors were open 10 to 20 percent of the time, it took 12 to 18 minutes for the number of aerosols to drop by 100 times, research leader and physicist professor Daniel Bonn said. If elevator doors were left permanently open, this happened within 2 to 4 minutes.

"Speaking loudly can produce up to several hundred thousand droplets per minute, while a single cough can produce several million droplets. Inhalation of the air after an infected patient speaks or coughs in an elevator then implies a potential uptake of tens to many thousands of RNA copies of COVID-19 per minute, depending on the contagiousness of the infected patient," the researchers stated. It is not yet known what amount would be required to contaminate another person.

The researcher recommend leaving elevator doors open for longer, if at all possible. And talk or cough as little as possible in an elevator. Wearing an adequate mask can also help.

They also recommended optimizing ventilation in elevators. "It turned out that the ventilation in all checked lifts automatically switched off after 1 to 2 minutes. This can of course be easily extended by reprogramming the control software," other research leader Dr. Cees van Rijn said.