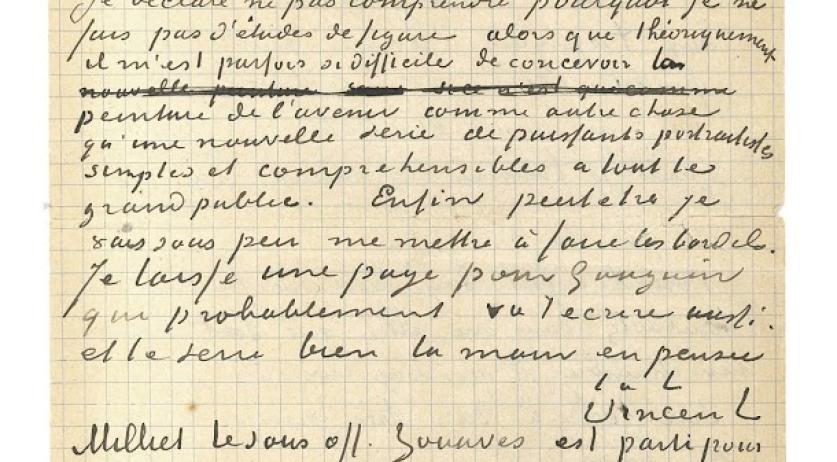 The Vincent van Gogh Foundation bought a letter on auction in which Van Gogh and fellow artist Paul Gauguin describe their stay at the Yellow House in Arles, and their visits to local brothels to their artist friend Emile Bernard. The letter, written in November 1888, was purchased Tuesday at an auction in Paris for 210,600 euros, and will form part of the Van Gogh Museum's permanent collection.

It will go on display as part of a new exhibition in October, the museum announced.

In the letter, the Van Gogh and Gauguin take turns to account their stay at the Yellow House. According to the Van Gogh Museum, this is the only letter Van Gogh ever wrote together with another artist and it is considered the most significant document written by the Dutch artist that was still in private hands.

"We are delighted and very grateful that the Vincent van Gogh Foundation has made it possible to add such a remarkable letter as this  to our collection, especially in these troubling times," Van Gogh Museum director Emilie Gordenker said. "We always work closely with the foundation, and are thrilled that – thanks to this acquisition – this important letter can be included in our autumn exhibition focusing on Van Gogh’s letters."

According to the museum, the letter was partly to convince artist Emile Bernard to travel south and join Van Gogh and Gauguin in their quest to establish a utopian artists' colony in Arles. Van Gogh and Gauguin took turns to write about their first impressions of their collaboration and their stay in the Yellow House. Van Gogh wrote: "Now something that will interest you - we've made some excursions in the brothels, and it's likely that we'll eventually go there often to work."

"The artist friends' different tones of voice add a psychological depth to the letter, particularly considering the tragic end of the partnership when Vincent cut off his ear during a psychotic episode," the museum said.

The letter will first be exhibited as part of the exhibition 'Your loving Vincent' from October 9. The exhibition consists of 40 letters written by Van Gogh, along with some of his iconic artworks such as The Bedroom, The Sower, and The Potato Eaters.