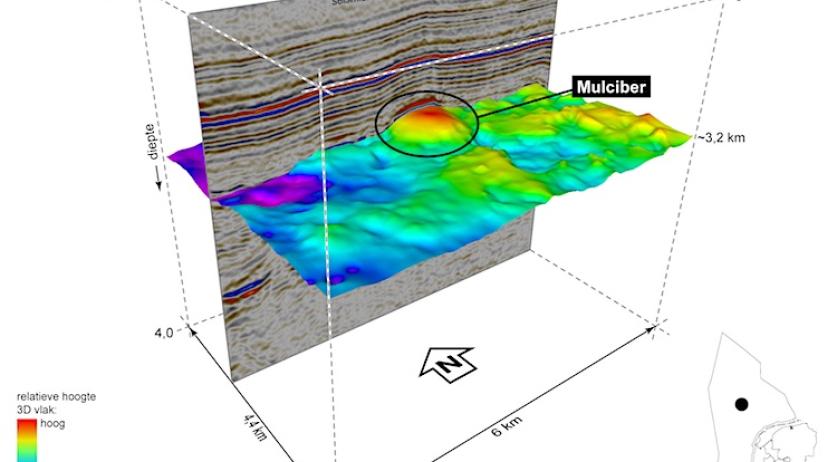 An extinct volcano has been discovered about 100 kilometers off the coast of Texel, the Netherlands Organisation for Applied Scientific Research (TNO) confirmed this week. The 150-million-year-old volcano, named 'Mulciber' after the Roman god of fire, was discovered accidentally by TNO researchers during a reanalysis of old seafloor maps while on the search for oil.

The ancient formation was recognized by deviations in the seafloor's structure, combined with measurements of the earth's magnetic field. According to Michiel van der Meulen, who headed up the Geological Survey of the Netherlands for the TNO, the discovery marks an important moment in the understanding of volcanism in the North Sea.

"The North Sea and the geological deposits in it seem to me to be reading an exciting story. We think we know the big story now. But if as you reread it, characters and storylines become more and more apparent, so this discovery adds to the general knowledge about our living environment," Van Der Meulen explained to public broadcaster NOS on Saturday.

He also explained in a separate statement about the discovery that the volcano will most likely never erupt again. "The chances of the Mulciber erupting are nearly zero. Geologists distinguish between dormant and extinct volcanoes. Dormant means that it is now quiet but can become active again. This is possible after hundreds or even thousands of years of inactivity. But we can declare the Mulciber extinct."

Mulciber is the second volcano to be discovered in Dutch territorial waters. The first, the extinct Zuidwal Volcano, was discovered in 1970 during an oil search. It is located around 2 kilometers below the surface of the Wadden Sea, just off the coast of the Netherlands.

The latest geological find was not confirmed the same way the Zuidwal discovery was made, where an oil company accidentally bored into it. Still, the Mulciber was positively confirmed as a volvano. "Substrate composition, deposits, age, seismic data: everything confirmed the presence of a volcano," said researcher Geert-Jan Vis in a statement.

In addition to Mulciber and the Zuidwal Volcano, there are two active volcanoes in Dutch overseas territories in the Carribean. One of which sits on the island of Saba, and the other on St. Eustatius.