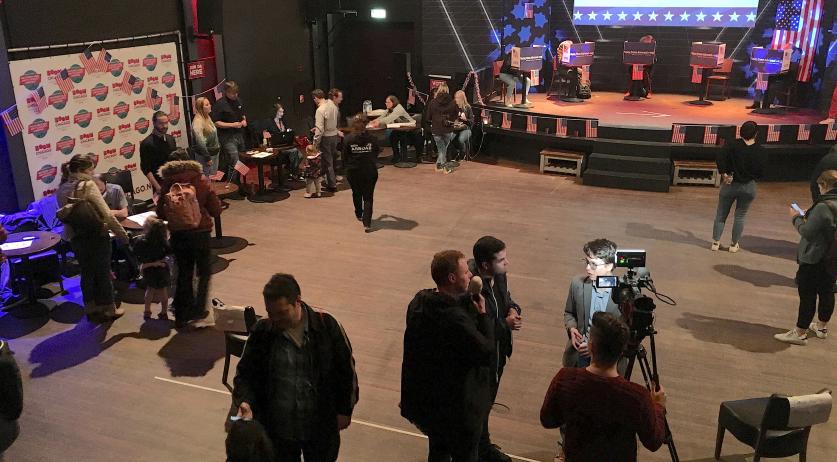 Hundreds of American Democrats descended on Boom Chicago in Amsterdam to cast their ballots and nominate their party's candidate for president. Democrats Abroad Netherlands set up a polling place in the Rozengracht theater on Super Tuesday, when 14 U.S. states in the U.S. take part in primary elections.

Senator Bernie Sanders won the evening with 151 votes when the polls closed, with Senator Elizabeth Warren taking 115. Fifty people handed over a ballot for Joe Biden, the former vice president, and five chose Michael Bloomberg. One person voted for Andrew Yang, who resigned three weeks ago. Voting by mail or email is possible through March 10, after which the full results for the Netherlands and global totals will be revealed. The Amsterdam event was one of three in-person voting initiatives the organization arranged for its membership this primary season, with the other two taking place this weekend.

Many said they appreciated the physical experience of receiving a ballot from a volunteer, filling it out privately in a booth, and submitting their votes at a real polling place. “People really like this. The first thing they say when they walk in is, ‘This is so great!’”, said Martha McDevitt-Pugh, a spokesperson for the Netherlands branch of Democrats Abroad. She is also one of the global organization’s eight delegates representing the membership at the upcoming Democratic National Convention in Milwaukee.

“You get to be with people and have an actual experience like you would have at home when you’re voting,” she said.

“It removes a lot of the barriers,” said Cynthia Freivogel. “I think I’ll convince my husband to come tonight. We never get his absentee ballot quite organized.”

"There’s something nice about the ceremony of it, of feeling like it’s official and that I came and stood up for something," said Noah Berman. “As a Democrat it’s a chance to bring about the kind of change that I want to see,” the Sanders supporter stated. He is an ardent supporter of Medicare for All, the Green New Deal, and workers’ rights. “As they say, ‘Stand up for people you don’t know.’”

The American political party is one month into a primary election process to determine who is the strongest candidate, and who has the potential to unseat the incumbent, President Donald Trump, in the November general election.

Chris Rost and his wife have been living in Amsterdam for about a year and a half. “I don’t believe that living in a different country absolves me from my responsibility to participate in elections back home,” he said. As a diabetes patient, the former Illinois resident appreciates having access to healthcare in the Netherlands, and wants to see more people in the United States get free or truly affordable access to medical treatment.

Those who spoke with NL Times were enthusiastic about the primary, choosing candidates they felt reflected the issues which mattered most to them. Though many were concerned about the electability of some candidates, only a few said they made their selection primarily based on who was most likely to defeat Trump in November.

“I’m less concerned about beating Trump, and more concerned about supporting my favorite candidates,” said Nick van Bergeijk, a born-New Yorker who grew up in Amsterdam. He said he backed Yang, but after he dropped out of the race Van Bergeijk pulled the lever for Sanders, the front-runner with 60 delegates. "I think they both support the same ideology. Making sure that the economy works for all people, and I think that's been lacking so far. For me, Sanders was always a close second."

"My original choice would have been for Elizabeth Warren, but I don't think that she's going to make it. I'd rather have my vote count more, so I voted for Bernie Sanders," Devin Beliveau said. She was very concerned about making sure her voice was heard this election cycle, as in previous years either the candidate was often decided before her state was scheduled to vote, or the party's nominee was overwhelmingly clear.

"I think it's really important that we focus not just on the president," McDevitt-Pugh added. "There's so many other important elections in our cities, counties, and states. Those elections make a really big difference ... in terms of the quality of life."

Americans arrived at the Amsterdam event as the field of Democrats vying for the presidency consolidated further, with the exits of Pete Buttigieg and Amy Klobuchar, both of whom threw their support to Biden, who has 54 delegates thus far. Buttigieg, the mayor of South Bend, Indiana, won 26 delegates in earlier contests, and Klobuchar took seven. Tom Steyer also pulled out, pledging to back any candidate the Democrats select to be their nominee.

Biden’s new endorsements following a win in South Carolina put some wind under his sails with Sanders as the party’s current front-runner. Warren is also pressing her case to be the Democratic Party nominee, and first-ever female President of the United States. The senator has earned eight delegates to date.

The former mayor of New York, Michael Bloomberg, has spent hundreds of millions of dollars on his campaign in a late bid to wrest control of the party. And at 38 years of age, Tulsi Gabbard is the only viable candidate left in the Democratic nominating process who is under 70. However, her attempt is considered by many pundits to be unlikely to gain significant traction. Neither of the two have won any delegates after a month where four state primaries were held.

"There is such fighting within the Democratic right now about who should represent the party, so I made sure to cast my vote," Annalisa Swank told NL Times, but it wasn't just the in-fighting which troubled her. "Our politics are extremely polarized right now by party divide," she said. "Right now our national government is not functional."

The global organization of Democrats Abroad represents issues affecting nearly seven million Americans who live outside of the U.S., including about 40 thousand living in the Netherlands, McDevitt-Pugh said. They lobby on issues like making taxation of Americans overseas easier to understand, with a goal of eliminating the requirement that American citizens file income tax statements annually. The organization also advocates on behalf of Americans who wish to bring their spouse and children into the U.S. when they do not have American citizenship.

To win the complicated nominating process, a candidate needs a total of 1,991 delegates in the first round of nominating ballots at the DNC in July. Otherwise they need to win a combination of 2,376 delegates and superdelegates in later rounds. In most cases, delegates must fairly represent the states and organizations which sent them to the convention, while superdelegates are free to vote for their preferred candidates.

“A lot of people feel like, ‘Well the state that I vote in is already decided in a lot of elections.’ Having a voice as a citizen of the world seems really great,” Freivogel said.

Voting in the Democrats Abroad primary was scheduled to take place by mail and email through March 10, with ballot boxes set up at TGI Fridays on Stationsplein in Utrecht on Saturday, and at the American Book Center on Lange Poten in The Hague a day later.