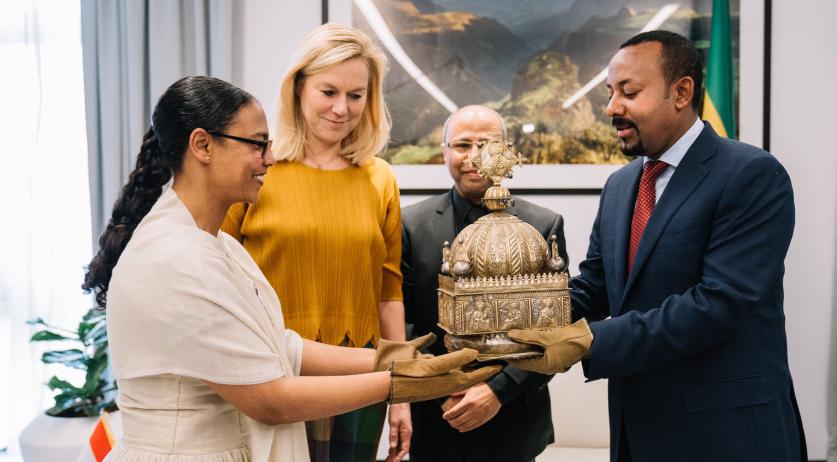 The Netherlands returned a presumably stolen ceremonial crown from the 18th century to Ethiopia on Thursday. The crown was secretly kept hidden in an apartment in Rotterdam for over 20 years. Minister Sigrid Kaag of Foreign Trade and Development Cooperation made a one-day visit to the African country to return the crown to Prime Minister Abiy Ahmed.

The Netherlands set "the right example" by returning the stolen artifact to Ethiopia, Prime Minister Ahmed said at the ceremony. The copper crown is "extremely important" to Ethiopia and the Netherlands made a "fantastic decision" to make sure it was returned.

Sirak Asfaw, who came to the Netherlands as an asylum seeker from Ethiopia, said he happened to find the crown in 1998 in the luggage of a visitor from Ethiopia. He assumed the treasure had been stolen, but did not want to return it out of concern for the artifact winding up in the hands of the regime there at that time. This was partially due to his fear that it may have been looted. Instead, Asfaw kept the crown hidden in his Rotterdam home for over two decades.

PM @AbiyAhmedAli met this morning with Dutch Minister for Foreign Trade & Dev’t Cooperation, Ms. Sigrid Kaag who came to Ethiopia to handover a ceremonial 18th century crown. The crown had been missing since 1993 and we rediscovered in Rotterdam, Netherlands in October 2019. 1/2 pic.twitter.com/gGUUfC9ybc

When reformist Prime Minister Ahmed was appointed, Asfaw decided it was time to return the crown. He joined Minister Kaag on the trip to attend the event. The Prime Minister described Asfaw as a "careful guardian" of this treasure.

"I have no words for it. This was the best moment of my life," Asfaw said after the return ceremony, according to news wire ANP. "My task is now complete." Returning the crown was the right thing to do, he said. "The crown belongs to the Ethiopian people," he said, according to the news wire.

"I would also have returned a Rembrandt to the Netherlands."

"It is extremely important that this cultural heritage is back in its place of origin. That happens far too little," Minister Kaag said.

The crown dates from somewhere in the 1780s​. It includes a reference to Emperor Fasilides, who came to power in 1632. There are about 20 such crowns left, according to the news wire. This one disappeared in 1993.

The Netherlands government facilitated this handover with the belief that it has a duty to restitute this important artifact back to Ethiopia. 2/2#PMOEthiopia pic.twitter.com/dvOifj9LR8